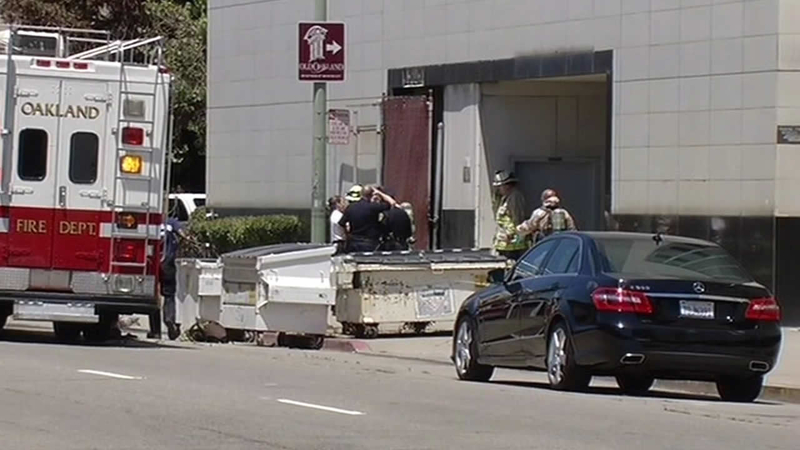 OAKLAND, Calif. (KGO) -- Oakland police headquarters had to be evacuated on Friday, shutting down some city services.

There were about 200 employees forced out of the building around 11:30 a.m. at the police administration building on Seventh Street, after someone noticed a foul odor.

When it happened, the building was immediately closed and remained closed for the rest of Friday. If firefighters are done with their investigation, then the building may reopen Saturday.

Just after 11 a.m., employee Virginia Ruiz was told to leave police headquarters. She left everything behind, including her purse.

"It was very fast, sitting there and the sirens went off and then you see everyone saying evacuate and so it was fast," Ruiz said.

"One of our lieutenants on the second floor smelled the foul smell and pulled the alarm to notify everyone to evacuate the building," Oakland Police Department spokesperson Frank Bonifacio said.

Fire crews arrived with the hazmat team. All suited up, they went through the entire nine-story building. At first they were looking for a possible gas leak, but quickly realized the smell was coming from the HVAC system. An air conditioning company later arrived.

Later, employees were allowed back into the building to retrieve items.

No public services were ever disrupted.

"Our 911 dispatch center is not located here at 455 7th Street so that's not affecting any of the calls for service, for the officers on the streets," Bonifacio said.

People who came to do any kind of business, could not get in. Police closed off the surrounding area.

"I was just trying to get back to my office on 4th and Broadway, but I can't," said another employee.

The Alameda County Superior Courthouse is next door. Employees were not evacuated, but some were concerned.

Just last month, the building was evacuated and closed after a toilet flooded. Many blame it on an old infrastructure.

During Friday morning's incident, PG&E tested the area around the building as a precautionary measure. No gas leaks were detected.

The building will remain closed to the public until further notice. The Oakland Police Department's Eastmont Substation, located at 2651 73rd Avenue, is open to the public Monday - Saturday 8:00 AM- 4:00 PM.