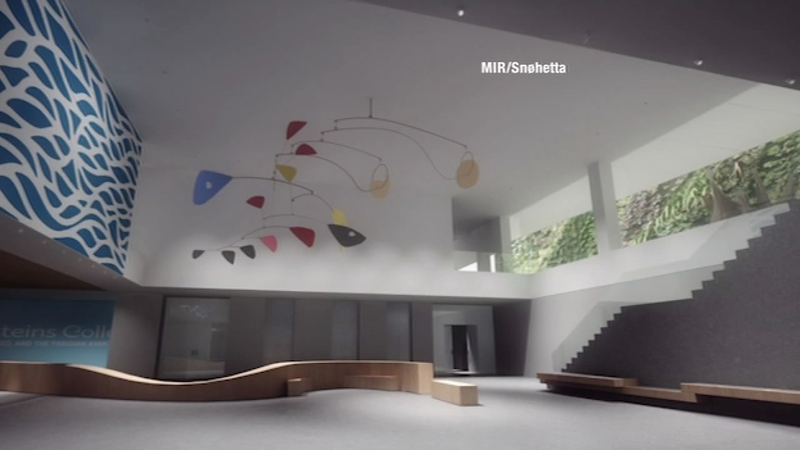 SAN FRANCISCO (KGO) -- On Wednesday, steel workers will put the last beam in place on a massive expansion of the San Francisco Museum of Modern Art. Only ABC7 News got a sneak peak at what's happening. What you'll see can only be summed up as extraordinary.

The new addition to the San Francisco Museum of Modern Art is taking shape, now rising 20 stories above the street.

"It's very exciting after years of work in preparation to finally see the building coming up," said museum director Neal Benezra.

Only ABC7 News was there when Benezra was there to check out the progress on the $305 million expansion. It is desperately needed.

Since the current museum opened in 1995, the collection has grown in size and popularity, exploding from 12,000 pieces to roughly 32,000 works of art. That includes 1,100 works from Don and Doris Fisher, co-founders of The Gap.

There have bene 23 million people that have visited the museum since it was founded in 1935. More than half of them have come just since the museum moved South of Market.

"This is going to be one of the finest museums of modern contemporary art in not just the United States, but in the world," said Benezra.

From SKY7HD you can see the building rising near Yerba Buena Gardens.

When completed, it will be as cutting-edge as the art it will hold. The expansion was designed by renowned architectural firm Snhetta.

Architect Craig Dykers explained his design saying, "It houses great works of art. So as you approach the building from a distance, you should recognize that it has a unique function in the city."

The expansion is going up behind the existing landmark building designed by famed architect Mario Botta. When completed, it will add 235,000-square-feet, a huge new space for exhibitions and installations.

"It is a very calm experience," said Dykers, "The rooms are designed to allow the art to move forward in your consciousness, so it has less sculptural identity on the interior."

Last year crowds lined up outside the museum to get a final look before it closed for construction. The museum provided us with video of the staff packing up many of the museum's priceless works, now being stored at an undisclosed location.

However, not everything is tucked away. The museum loaned some of its collection to other museums around the state. At the Asian Art Museum in San Francisco, "Gorgeous" takes a look at our perception of what is beautiful over 2,000 years. The exhibit runs until September 14.

"We have another exhibition opening in a couple weeks at the Oakland Museum of California," said Benezra.

Still, it will be just a peek at what will be on display when the expanded museum of modern art reopens in 2016.

The cost of the museum is being entirely funded by private donations, including a substantial, but undisclosed contribution from the Fisher family.