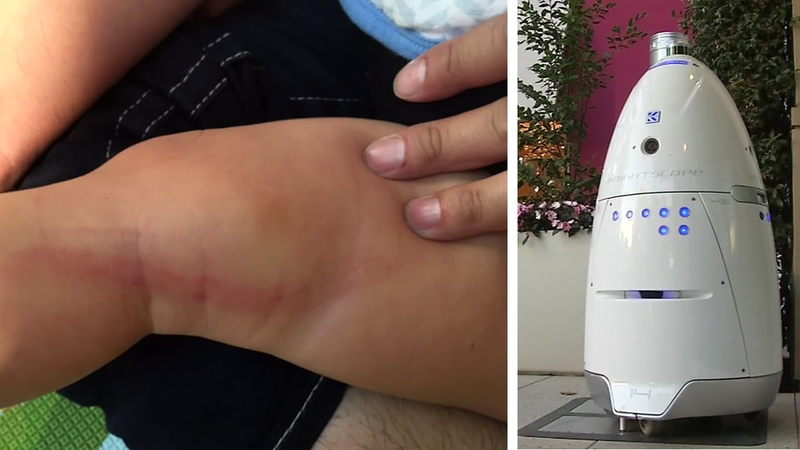 PALO ALTO, Calif. (KGO) -- The parents of a young boy who got knocked down and run over by a security robot at Stanford Shopping Center want to get the word out to prevent others from getting hurt.

They said the machine is dangerous and fear another child will get hurt.

It amuses shoppers of all ages, but last Thursday, 16-month-old Harwin Cheng had a frightening collision with the robot. "The robot hit my son's head and he fell down facing down on the floor and the robot did not stop and it kept moving forward," Harwin's mom Tiffany Teng said.

Harwin's parents say the robot ran over his right foot, causing it to swell, but luckily the child didn't suffer any broken bones.

Harwin also got a scrape on his leg from the incident. "He was crying like crazy and he never cries. He seldom cries," Teng said.

Stanford Shopping Center and Knightscope, the Mountain View company that built the robot have yet to respond to our emails and voice mail messages.

But the fact that it didn't seem to detect Harwin is something shoppers find disconcerting. "Garage doors nowadays, we're just in a day in age where everything has some sort of a sensor," shopper Ashle Gerrard said.

"Maybe they have to work out the sensors more. Maybe it stopped detecting or it could be buggy or something," shopper Ankur Sharma said.

Harwin's parents say what's even more worrisome is that a security guard told them another child was hurt from the same robot days before.

They hope by sharing their story, other parents will be careful the next time they're at Stanford Shopping Center.

16 mo old has injuries to leg, foot after @StanfordShop security robot knocks him down and runs him over. #paloalto pic.twitter.com/tJdDNeFJq1

Parents say 300lb security robot @StanfordShop knocks over their son and runs over his foot. pic.twitter.com/5IZ4oOkkNi