KGO
By by Elissa Harrington
SAN FRANCISCO (KGO) -- A San Francisco woman says requesting a ride turned into a terrifying experience when her driver threatened to rape and kill her.

Uber has deactivated the driver's account, but police don't know who the driver is and have not been able to make an arrest.

Eve Batey had just wrapped up dinner with colleagues Thursday night when she summoned an Uber to take her home. She was waiting near the Muni line on San Francisco's Duboce Avenue, but the driver couldn't find her.

"He said, 'I'm at 400 Duboce Avenue and you're not here.' He was getting more and more aggressive and was swearing at me," Batey said.

Batey, now frightened, canceled the trip. The furious driver would not leave.

"If you see that ramp there, he started pulling up onto that ramp and came around the corner and started screaming, 'I can see you on your phone. Look over and you can see me.' And I hung up the phone. And he called back. And at that point he said, 'I'm going to find you. I'm going to rape you and I'm going to kill you,'" Batey said.

He left a voicemail. "Cancel the trip. Are you new in Uber, or what kind of human are you? Cancel the trip so we can work. Why are you disturbing people?"

Batey contacted police, but it's difficult to track the driver down, only his first name and a picture that Batey's not convinced is him showed up on her app. 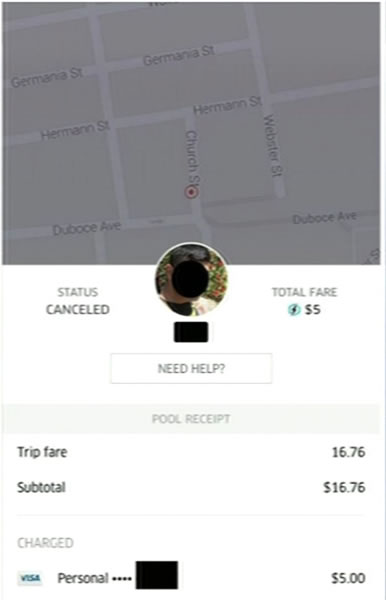 In a statement, an Uber spokesman apologized, saying, "this kind of behavior is absolutely unacceptable and the driver's access to Uber has been permanently removed."

"I think that I'm probably going to stick with Muni or my car for a long time," Batey said.

Batey says in hindsight she's lucky the app sent the driver to the wrong location or she might have gotten into a car with somebody dangerous.
Related topics:
san franciscorapesfpduberthreatdriver
Copyright © 2020 KGO-TV. All Rights Reserved.
UBER