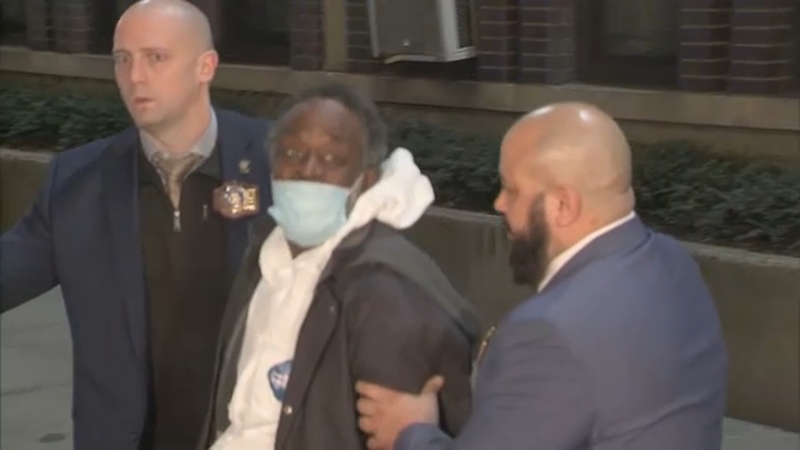 NEW YORK CITY -- A 40-year-old New York woman was killed after a man pushed her in front of an oncoming subway train in Manhattan Saturday morning, police said.

Simon Martial, 61, is set to be arraigned in court but is currently being held at Bellevue Hospital with a police guard.

Police say Michelle Alyssa Go, 40, who worked for Deloitte, was pushed onto the tracks as a southbound R train approached the station.

Go was pronounced dead on the scene.

New York City Mayor Eric Adams joined NYPD officials to give an update after a woman was shoved into an oncoming train inside a Times Sqaure station Saturday morning.

"This incident was unprovoked and the victim does not appear to have had any interaction with the subject," Police Commissioner Keechant Sewell said. "This was a senseless, absolutely senseless, act of violence.

Officials say the suspect, Martial, fled the scene but eventually turned himself in.

Martial has been arrested and charged with murder.

While the victim is Asian, police say the incident is not being treated as a hate crime at this time. Since the onset of the pandemic, a string of bias attacks have been reported in New York City.

Police believe Martial is homeless and authorities say the suspect was known to police and has prior arrests in 2017 and 1998 for the attempted robberies of cab drivers.

"To lose a New Yorker in this fashion would only continue to elevate the fears of individuals not using our subway system," Adams said.

MTA Acting Chair and CEO Janno Lieber also spoke out after the incident.

The highly-infectious omicron variant could hasten the pandemic to end after the surge, according to several experts ABC7 News talked to.

They announced that police will patrol the subways during their beat, looking to help the homeless.

"We're going to get them the support they need, get them into shelter, and ultimately into housing," Hochul said.

The initiative seemingly in effect was not effective in this incident.

The suspect called himself a "god," ranted, and apparently confessed openly in public to the crime as he was being walked by police.

The MTA has surveillance cameras in every subway station now.