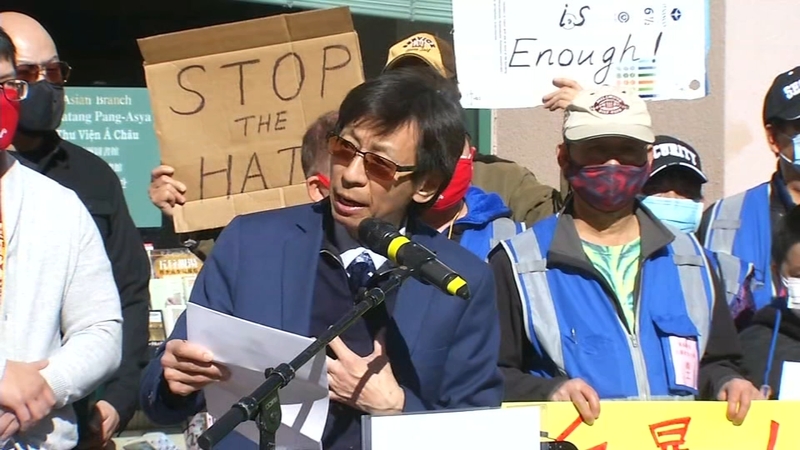 OAKLAND (KGO) -- An outspoken advocate for Asian Americans in Oakland was viciously attacked while on his way to help an assault victim. All the while the community rallies against a proposed bill to reclassify certain assaults as misdemeanors.

Carl Chan, President of Oakland's Chinatown Chamber of Commerce, recalls the moment he was attacked while walking in the area of 8th and Broadway Thursday afternoon.

"I stood up right away facing the guy," said Chan.

Chan says he was called a racial slur and hit on the head before falling to the ground. He was only scraped up but says it could've been much worse.

"My body is hurt, my feelings are strong and even stronger than before," said Chan.

Chan has been a pillar of strength to Oakland, not only for attack victims who are scared to speak out, but also in the fight against a bill proposed by East Bay Senator Nancy Skinner.


Chan was one of many community leaders who rallied Friday in front of the state office building against SB82. If passed, certain robberies that do not involve a deadly weapon or great bodily harm will be charged as misdemeanors, not felonies.

When Chan was attacked he was on his way to visit 69-year-old Mr. Hua Zhen Lin, who says a man attacked him with a cane while riding the bus Monday.
"It's painful and he can't see...he's scared sleeping at night, " said Mr. Lin's daughter.

While SB82 wouldn't affect Chan or Mr. Lin's cases because they were not robbed, Mr. Lin's family is sharing their story to help victims get justice. A family member says she'd like to see the perpetrator receive at least five years behind bars.


Because Chan mustered enough strength to take photos of his alleged attacker it helped Oakland police make an arrest shortly after.

Senator Skinner's spokesperson says SB82 is with an appropriations committee and is heading to a hearing on May 20. Skinner addressed Chan's incident saying in part she is "deeply troubled" to hear about his attack and is "committed to working with API leaders to end these attacks and to address the lies and propaganda that have fed racism and intolerance."

Chan says he will keep fighting, even harder after his assault.

"My determination isn't going to be diminished by this attack at all."