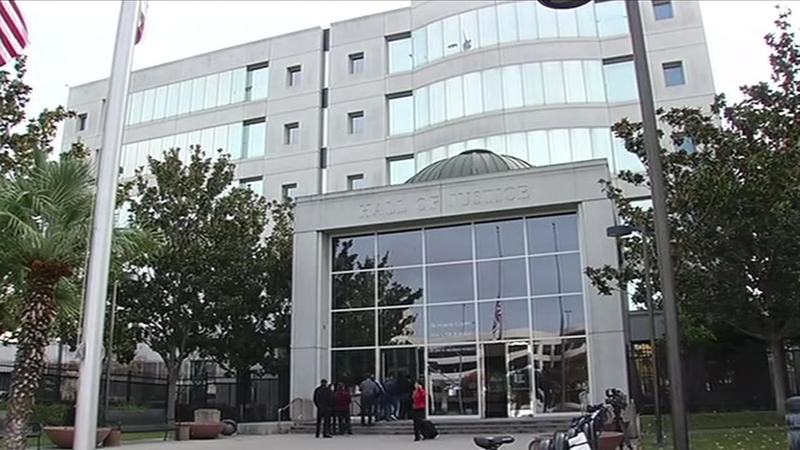 SAN JOSE, Calif. (KGO) -- In a case spanning the Bay Area, more than 20 people are facing charges related to a car break-in ring that investigators say was led by Oakland's "Ghost Town Gang." Police say the thieves targeted shopping centers. Five of the suspects appeared at the Santa Clara County Courthouse on Monday.

The district attorney's office says the break-ins were orchestrated by the gang, which ups the charges. Another defendant is also facing an attempted murder charge for allegedly trying to run over an officer who was trying to arrest him. This is a massive and complicated case.

"Worked together to take down a violent street gang that had been burglarizing vehicles throughout the Bay Area," said Santa Clara County Deputy District Attorney Sandip Patel.

According to Patel, the common connection is that all are members of the Ghost Town Gang of Oakland.

"This particular gang seemed to target shopping centers," he said. "Two in particular seemed to come up often."

He says those two are the McCarthy Ranch in Milpitas and Stanford Shopping Center in Palo Alto where electronics were taken.

There are some 72 break-ins, which defense attorney Robert Byers says complicates the case.

"You have to figure out how these cases are connected," he said. "It doesn't take 21 people to break into a car and yet it looks like there are several counts, when in fact there are 21 people charged with breaking into the same car."

He's also concerned about the alleged connections to the Ghost Town Gang, as are family members of the defendants.

"The gang affiliated, it's just not true," said Wanda Abraham, mother of one of the defendants.

Abraham isn't sure if her son is involved in any of the thefts, but says just because they live Oakland doesn't mean her son is in a gang.

"That's where we live, so how he's gang affiliated I don't understand," she said.

Some of the defendants were already in custody when these crimes were said to have occurred. But there are conspiracy charges involved in this case. The DA's office has yet to elaborate on those conspiracy charges and has not said how those items were fenced once they were stolen.