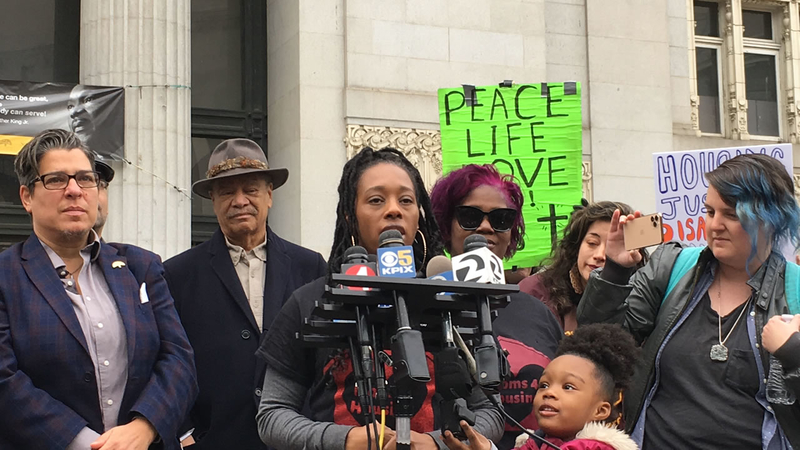 OAKLAND, Calif. (KGO) -- Six days after Alameda County sheriffs crashed through the front door of a modest house on Oakland's Magnolia Street and arrested those who were living there illegally, those same Moms 4 Housing are now in negotiations to buy the house from which they were evicted.

"We're just happy. We're ready to buy Mom's house and we're ready to continue this movement," said Dominique Walker, one of the moms who was evicted and arrested last Tuesday. "This movement does not end today with us, with that house on Magnolia Street. We will not stop fighting or organizing until all unhoused folks who want shelter have shelter."

Mayor Libby Schaaf says her office was involved in the negotiations between Wedgewood Properties and Mom 4 Housing.

"These three parties have come together to really send a message that everyone cares about this crisis of homelessness," said Schaaf.

The agreement does not stop with the one house on Magnolia. Wedgewood has agreed to give the city, the land trust and other groups first right of refusal on all its Oakland properties, which currently total about 50.

"What this is going to provide the city of Oakland along with the disadvantaged, is a pipeline of homes that Wedgewood is going to make available to the city so that it can participate in buying some of them," explained Sam Singer, spokesperson for Wedgewood Properties.

"Wedgewood has offered to change the way they do business in Oakland and to offer community land trusts, or other organizations, or the city the right of first refusal on all of their properties," explained Schaaf.

Moms 4 Housing says once the sale for Magnolia is complete and upgrades are finished, they and their kids will move back in and use it as a base of operations for their organization.

The Alameda County Sheriff's Department has been heavily criticized for the tactics used in evicting the moms last week. In a statement, spokesman Ray Kelli told ABC7 News, "It's unfortunate this deal was not reached prior to the eviction." Kelly said the sheriff's department will seeks compensation from Wedgewood for the cost of the early-morning operation, estimated to be about $50,000.

#BREAKING @LibbySchaaf announces that Wedgewood properties has agreed to negotiate with @moms4housing to sell the Magnolia St. home to the moms, who had illegally occupied the home for 2 months. #abc7now https://t.co/o1wfCk0dlA pic.twitter.com/sgquXI9UWY

#DEVELOPING “I do not condone illegal acts, but I respect them...” @LibbySchaaf in announcing that Wedgewood Properties has agreed to negotiate with @moms4housing the @CityofOakland and #OaklandCommunityLandTrust for purchase of Magnolia St. house.https://t.co/o1wfCk0dlA pic.twitter.com/Dpqz0at6bd