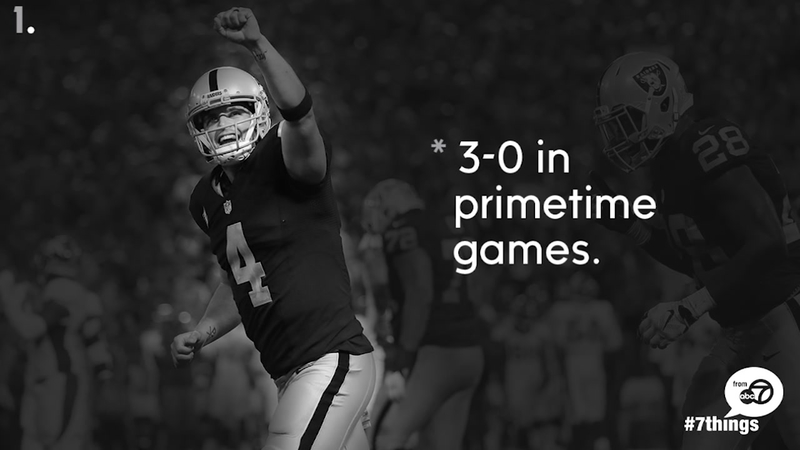 MEXICO (KGO) -- The Oakland Raiders are facing off against the Houston Texans in Mexico City this afternoon. So in honor of tonight's game, here are 7 things you may not have known about Raiders star Derek Carr.

As much as possible, the Oakland Raiders and Houston Texans want to treat their trip to Mexico City as business as usual.

But there's no hiding the fact that this game will be unlike any other road trip.

Players have been given security warnings. The teams are taking precautions about how their food is prepared. And both teams are figuring out how to deal with the thin air 7,380 feet above sea level.


Both teams have some experience with playing at altitude, with the Texans traveling to Mile High in Denver last month and the Raiders making annual trips there. Mexico City is more than 2,000 feet higher than Denver but both teams are in the same boat.

"We're on an equal playing field," Texans offensive lineman Duane Brown said. "No one's more used to the altitude than the other team, so we're all going out there with the same struggle, if there will be a struggle."

The thin air also could impact how the game is played, with throws and kicks both able to travel longer distances. Three of the five longest field goals in NFL history have come at altitude in Denver, including Matt Prater's record 64-yarder for the Broncos in 2013.

Watch all the action tonight on ABC7 at 5 p.m.

Click here for full coverage on the Oakland Raiders.