Obama to welcome Southeast Asian leaders to US for talks 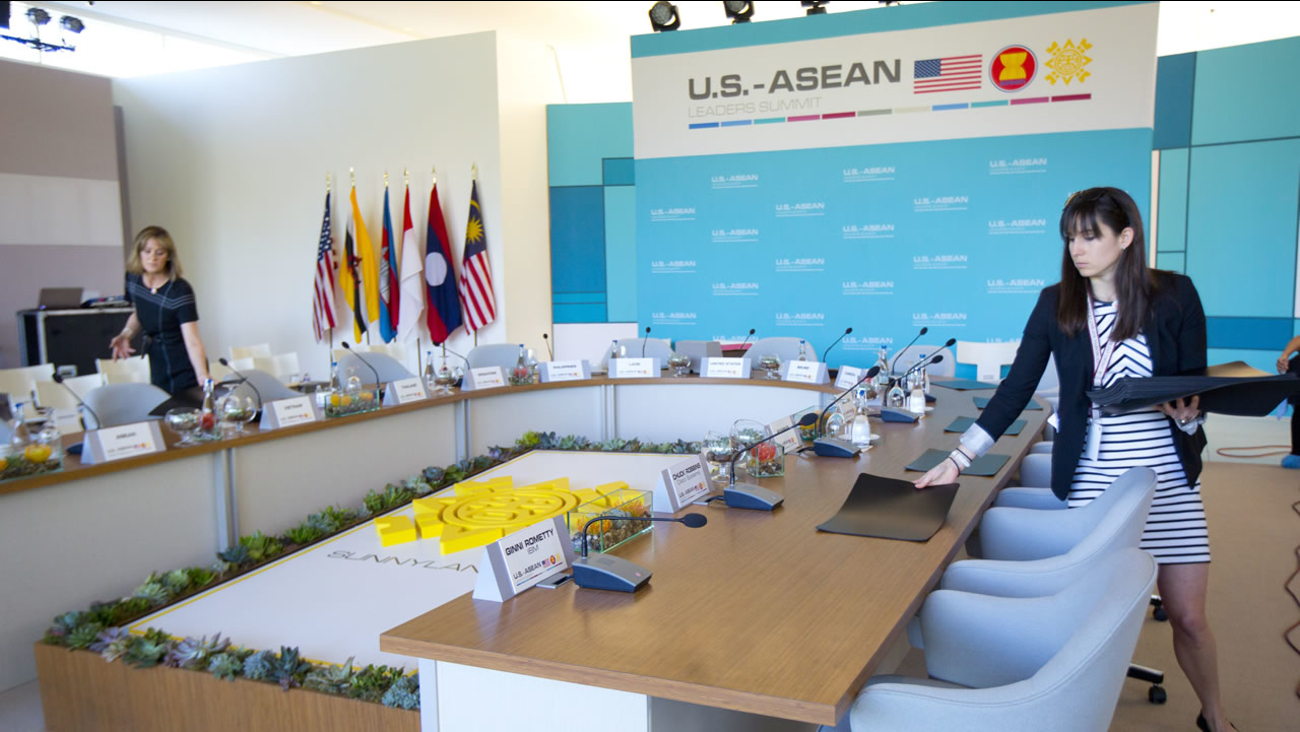 RANCHO MIRAGE, Calif. -- President Barack Obama and the leaders of Southeast Asian nations are gathering in Southern California for an unprecedented two days of talks on economic and security issues and on forging deeper ties amid China's assertive presence in the region.

Obama on Monday will welcome each leader from the 10 members of the Association of Southeast Asian Nations, or ASEAN, for a summit at Sunnylands, a posh California desert estate where Obama held his first meeting with China's current president.

Obama has traveled to Asia for the association's annual summit, but this is the first time leaders of Indonesia, Malaysia, the Philippines, Singapore, Thailand, Brunei, Vietnam, Laos, Myanmar and Cambodia are meeting in the U.S. China is not an ASEAN member.

The summit was conceived as part of Obama's mission to raise the U.S. profile and help set the agenda in the fast-growing Asia-Pacific, where China's territorial claims over disputed waters have raised international concerns and led to friction with ASEAN countries.

Member countries make up the seventh-largest economy in the world, the White House said.

Ben Rhodes, Obama's deputy national security adviser, said the nations are important partners for the U.S. on issues ranging from the economy to maritime security and counterterrorism to combatting the threat from climate change.

By hosting the summit, "we want to make very clear that the United States is going to be at the table and a part of setting the agenda in the Asia Pacific in the decades to come," Rhodes told reporters before the summit. "In order to do that, we need to be engaging organizations like ASEAN at the highest levels."

Obama planned to focus Monday evening's talks on the economy, specifically using innovation and entrepreneurship to promote prosperity in the region. After a working dinner at the estate, the conversation shifts Tuesday to regional security issues, including the South China Sea and counterterrorism, before the summit concludes at midday.

China says it has a historical right to virtually all of the South China Sea and has built seven artificial islands, including with airstrips, to assert its sovereignty. Taiwan and ASEAN members Brunei, Malaysia, Vietnam and the Philippines also claim land features in these potentially resource-rich waters, which are an important conduit for world trade.

Though not a claimant, the U.S. has spoken out against China's conduct and has angered Beijing by sailing Navy ships near some of the artificial islands. It has argued for the maritime rights issue to be resolved peacefully and is looking for ASEAN to take a unified stance by calling for the disputes to be resolved based on international law.

The Trans-Pacific Partnership, a free-trade agreement among the U.S., ASEAN members Brunei, Malaysia, Singapore and Vietnam, and seven other nations, will likely be discussed. The pact is Obama's signature trade achievement and he has sought to sell it to skeptical lawmakers and interest groups as an opportunity for the U.S. to shape the region's trade rules, not China.

Congress, however, must ratify the deal and that outcome remains in doubt.

Terrorism inspired by the Islamic State group is of increasing concern in the region. Eight people were killed during assaults last month in Indonesia's capital, Jakarta, the first major attack there in six years. Police said the attackers were linked to IS.

Singapore, Malaysia and Indonesia, the world's most populous Muslim nation, have all reported citizens traveling to fight in Iraq and Syria, and several small militant groups in the Philippines have pledged allegiance to IS.

Obama also plans to raise the issue of good governance and adherence to the rule of law. ASEAN members run the gamut of political systems, from open democracies in Indonesia and the Philippines to communist governments like Vietnam and Laos that ban political dissent.

Human rights advocates have faulted the U.S. for inviting unelected leaders, like Thai Prime Minister Prayuth Chan-ocha, who seized power in a May 2014 coup. Cambodia's Hun Sen, who has used violence and intimidation against political opponents, is making his first official U.S. visit during his 31-year tenure as prime minister.