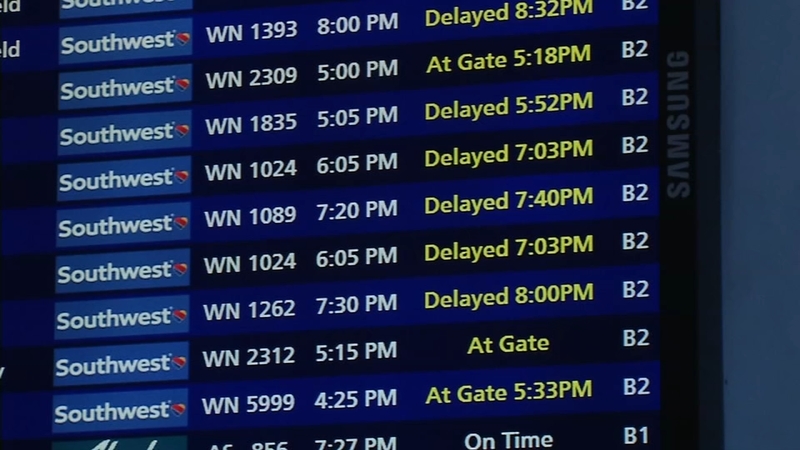 SAN JOSE, Calif. (KGO) -- On a system already stretched thin, the COVID-19 virus and omicron variant continues to cause turbulence during the Christmas travel season.

"That's resulted in us not being able to offer quite as many amenities like food and beverage options as we would like to for the travelers who are traveling this holiday season," SJC Deputy Director Scott Wintner told ABC7 News.

However, some aren't even making it that far. Travel Industry experts explained every aspect of the travel experience is at a breaking point.

"All it takes is a few breakthrough cases to have a situation where there's some type of meltdown or massive operational disruption," Zach Griff with The Points Guy said.

On Thursday, at least two major airlines have announced they are collectively canceling more than 200 flights for Christmas Eve -- some due to the surge of the omicron variant.

United Airlines said Thursday it preemptively canceled 112 flights for Friday. The United app told customers on some canceled flights that it is "due to an increase in COVID cases limiting crew availability."

RELATED: Fauci urges Americans to stay 'prudent' as omicron 'something to be reckoned with'

"That's nearly 10% of their schedule, strictly because of what they're calling COVID-related staffing issues," Griff added. "So, staff has contracted the virus- whether it's breakthrough infections happening to flight attendants, pilots, and ground agents."

A spokesperson for United released the following statement:

"The nationwide spike in Omicron cases this week has had a direct impact on our flight crews and the people who run our operation. As a result, we've unfortunately had to cancel some flights and are notifying impacted customers in advance of them coming to the airport. We're sorry for the disruption and are working hard to rebook as many people as possible and get them on their way for the holidays."

Delta Airlines is also proactively canceling around 90 flights for Friday, out of roughly 3,000 planned departures.

The airline says this is due to a combination of issues including potential inclement weather and the impact of the omicron variant.

A spokesperson released the following statement:
"Delta teams have exhausted all options and resources -- including rerouting and substitutions of aircraft and crews to cover scheduled flying -- before canceling around 90 flights for Friday. We apologize to our customers for the delay in their holiday travel plans. Delta people are working hard to get them to where they need to be as quickly and as safely as possible on the next available flight."

Industry analyst Henry Harteveldt with the Atmosphere Research Group told ABC7 News that for the Bay Area, we have some options.

"At least we do have three other airports," Harteveldt shared. "You can ask the airline to see if there are flights or connections available from one of the other airports. But it's up to you to get there."

He acknowledged many of the cancellations are happening at a moment's notice.

"The challenge, of course, is that everything has been booked so full, that there's very little room to get people on other flights that are operating," he continued.

Numbers show there is a growing demand for travel.

However, on the ground at SJC on Thursday, travelers who spoke with ABC7 News had no complaints.

Paula Taddei explained, "We'd been advised by the Vegas staff that we left just in time."

Jeff from Texas said, "We showed up extra early- which for my family is a feat in and of itself. We moved right through the TSA and we were early enough to sit down for a meal."

"Was not bad at all. I've seen worse during the week- a regular normal week, "Doug Jakubielski said.

"Anyone who has a seamless travel day during the holiday period should thank Santa and count their lucky stars for the blessings," Griff joked. "Because that is absolutely a gift."

Still, experts warn travelers should expect pandemic-related delays or disruptions across the board.

WABC contributed to this report.