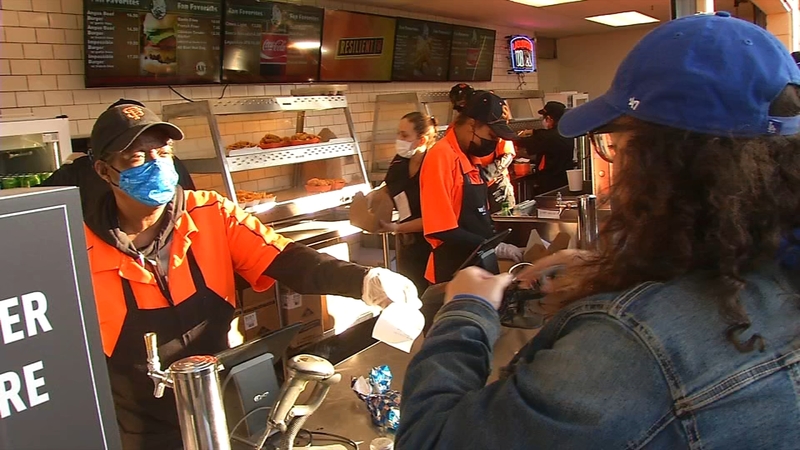 SAN FRANCISCO (KGO) -- Amid one of the most intense rivalries in Major League Baseball between the Giants and the Dodgers, the hometown team is facing the possibility of a double header in hard fought battles.

Among other things, the workers say they haven't gotten a pay raise in three years, and many feel unsafe doing their jobs after 20 of their colleagues contracted COVID-19 since the start of this season.

"We feel like we're not protected. There's no shields, no nothing," said one worker in the stadium.

The employees are demanding better contracts from their employer, Bon Appetit.

But, their union president, Anand Singh, says it's really the Giants who hold most of the cards, and that it's up to them to provide improved working conditions.

"Many of these of workers have worked for the ballpark for decades. Some of them go back to Candlestick, to the Candlestick days," Singh said.

Singh believes the Giants have a responsibility to step up to the plate, and says most of what's being asked for is modest for a franchise as well off as the MLB team.

It's a sentiment that's won support from local politicians such as District 6 supervisor, Matt Haney, who was on site for the workers' vote Saturday night.

"I know that this place doesn't operate without the workers. They're the ones who make the place run, they serve the food, they really are what bring the spirit to the stadium," Haney said.

But with negotiations beginning this week, Singh says he's hoping both sides can come to an agreement soon.