'So much crying': Dozens killed in election day bombing in Pakistan 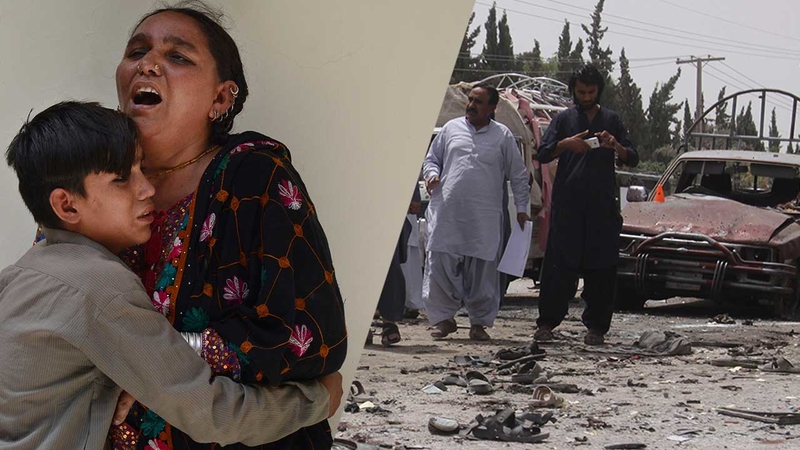 'So much crying': Dozens killed in election day bombing

ISLAMABAD -- A suicide bomber on a motorcycle rammed into people waiting outside a busy polling station in the Pakistani city of Quetta on Wednesday, killing at least 31 and casting a dark shadow on what was to be a historic day for the country as Pakistanis cast ballots to elect their thirds consecutive civilian government.

The attack in Quetta, the capital of Baluchistan province, underscored the difficulties this majority Muslim nation faces on its wobbly journey toward sustained democracy.

As polls closed, Pakistan's Election Commission spokesman Nadeem Qasim told The Associated Press that the commission had issued a notice to aspiring prime minister Imran Khan saying his vote could be disqualified after he cast his ballot in front of television cameras, violating "the secrecy of the ballot paper."

Qasim said Khan violated Pakistan's constitution, which guarantees the secrecy of the ballot. Images showed a smiling Khan with his ballot paper laid out in front of him as he marked the ballot.

Wednesday's voting for a National Assembly, the lower house of parliament, and four provincial assemblies followed a rancorous campaign marked by widespread allegations of manipulation. Analysts and rights groups have warned of post-election instability and predicted losing parties would cry foul.

The uncertainty of the outcome of the vote - no single party appeared assured of a simple majority win - could also lead to prolonged post-election jockeying that would hamper the forming of the next government.

"Whatever way elections run, I see a lot of instability," said defense analyst Ayesha Siddiqua, who authored Military Inc., a look at the extensive financial holdings of Pakistan's army.

A witness to the attack in Quetta, Abdul Haleem, who was waiting to cast his ballot, said he saw a motorcycle drive into the crowd of voters just seconds before the explosion. Haleem's uncle was killed in the blast.

"There was a deafening bang followed by thick cloud of smoke and dust and so much crying from the wounded people," he told The Associated Press.

No one immediately claimed responsibility for the bombing but local officials were quick to blame the Islamic State group.

Baluchistan also saw the worst violence during election campaigning earlier this month, when a suicide bomber blew himself up at a political rally, killing 149 people, including the candidate Siraj Raisani. Another 400 were wounded. Voting in that constituency has been suspended.

IS claimed responsibility for that attack, though Baluchistan has seen relentless attacks, both by the province's secessionists and Sunni militants who have killed hundreds of Shiites living there. In recent years, the IS affiliate in the region has emerged as a major force behind violence, often using local Sunni radicals from the outlawed Lashkar-e-Jhangvi to carry out its attacks.

Early voting was heavy at some polling stations in Islamabad, the capital, and also in the Punjab provincial capital, with several political party leaders standing in line to cast their ballots. Local television reported scattered incidences of police arresting people with pre-marked ballots.

Another concern is the unprecedented participation in these elections of radical religious groups, including those banned for terror links but resurrected and renamed, has also raised concerns - especially for minorities and women - ahead of the voting.

Jibran Nasir, an independent candidate from Pakistan's financial hub of Karachi, said he received death threats and even had a fatwa, or religious edict, issued against him after he refused to condemn Ahmadis, reviled by mainstream Muslims as heretics because they believe the messiah promised in Islam arrived over a century ago. Pakistan in 1974 declared Ahmadis non-Muslims.

Khan's supporters showered his vehicle with rose petals as he arrived to vote at a polling station near his home suburb in. Islamabad. After voting, he appealed on Pakistanis to come out and vote in huge numbers "to save future generations."

The third-largest party in the running is the left-leaning Pakistan People's Party, headed by Bilawal Bhutto, the son of late Prime Minister Benazir Bhutto, assassinated by the Pakistani Taliban, whom she had vowed to eradicate.

Election officials say more than 11,000 candidates are vying for 270 seats in Pakistan's law-making Lower House of Parliament and 577 seats in four provincial assemblies.

The 85,307 polling stations opened at 8 a.m. and will continue for 10 hours, an hour longer than in the 2013 polls. Voting for two parliamentary seats and six seats in provincial assemblies has been postponed due to attacks on candidates or disqualifications. First results are expected early Thursday.

There are more than 105 million eligible voters in Pakistan, 59 million men and 46 million women.

Pakistan's election commission reminded candidates their elections will be nullified if the female voter turnout didn't reach 10 percent. The requirement was imposed after the 2013 elections, when several areas banned voting by women, mostly in Pakistan's religiously conservative northwest. Some candidates were elected without a single woman marking a ballot.

Veteran rights activist Tahira Abdullah warned on Tuesday that local jirgas, or councils of elders, from 60 areas of the country representing 16 different constituencies, had signed agreements banning women from voting despite the new ruling. While some areas have refused to relent, others allowed women to cast ballots.

"We made history today," said Khan. "It is the first time that women have come out of their homes to cast their vote."

Voting is segregated throughout Pakistan with every single polling station divided into sections for men and women, including separate election officials.

Results will trickle in after polling ends, with the outcome expected early Thursday, according to election officials.

International and domestic election observers will monitor the voting. The European Union Election Observation Mission has 120 monitors at polling stations in major centers across Pakistan, with the exception of Baluchistan.