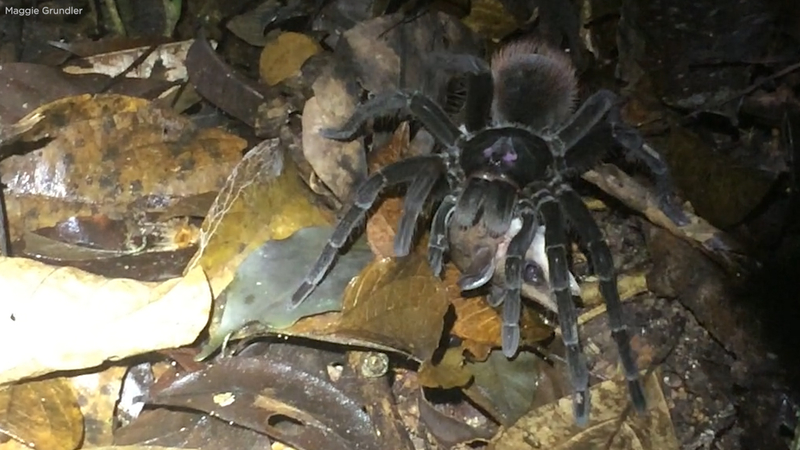 Opossum is next meal for this dinner plate-sized tarantula: VIDEO

ANN ARBOR, Mich. -- Even a spider has to eat, but you might have never realized just how nightmarish it can be to watch.

Newly released footage captured by a team of researchers shows a massive tarantula the size of a dinner plate as it dragged an opossum, its next meal, across the floor of the Peruvian rainforest in the dead of night.

The footage was captured during a recent scientific expedition to southeastern Peru's Madre de Dios region. University of Michigan evolutionary biologist Daniel Rabosky was leading a team of researchers on a journey to study spiders, scorpions and other arthropods to learn more about how they feed on small vertebrate animals.

"The opossum had already been grasped by the tarantula and was still struggling weakly at that point, but after about 30 seconds it stopped kicking," doctoral candidate Michael Grundler explained in a news release.

The video is the first known record of a mygalomorph spider feeding on an opossum, the university said.

"We were pretty ecstatic and shocked, and we couldn't really believe what we were seeing," Grundler added. "We knew we were witnessing something pretty special, but we weren't aware that it was the first observation until after the fact."

Rabosky has led the expeditions for more than a decade, and observations from him and his team members are compiled in a recently published scientific paper. Rabosky and his team also detail sightings of Ctenidae spiders preying on frogs and lizards, a scolopendrid centipede preying on a Catesby's snail-eater snake, another centipede eating a decapitated coral snake and more than a dozen other incidents.

"This is an underappreciated source of mortality among vertebrates," Rabosky said. "A surprising amount of death of small vertebrates in the Amazon is likely due to arthropods such as big spiders and centipedes."

Predatory spiders and other arthropods are equipped with specialized body parts that allow them to capture prey more easily, researchers said. In addition to larger jaws, beaks and fangs, some arthropods also have venomous proteins capable of immobilizing their prey.

The paper, "Ecological interactions between arthropods and small vertebrates in a lowland Amazon rainforest," is published in the journal Amphibian & Reptile Conservation.

A Virginia resident found the two-headed copperhead snake in her flowerbed. It eventually ended up at the Wildlife Center of Virginia, where experts conducted radiographs to learn more about the snake's anatomy.