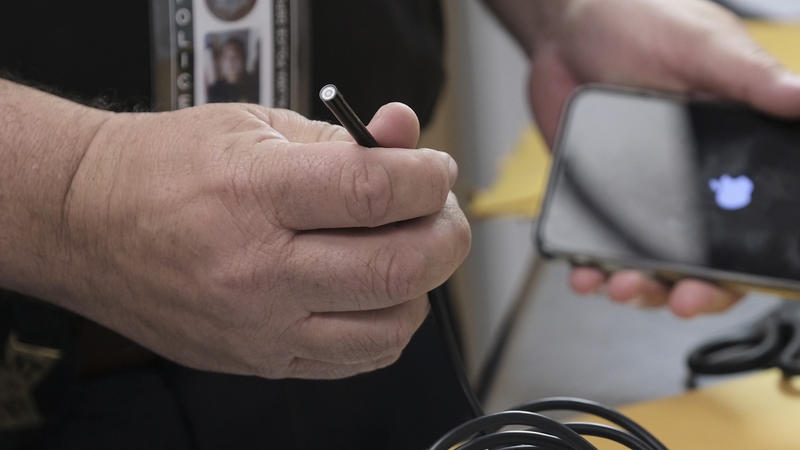 PETALUMA, Calif. (KGO) -- When you check into a hotel and close the door to your room, there's an expectation of privacy.

However, at a Sheraton hotel in Petaluma, that does not appear to have been the case.

"He told us he likes to watch people and is into voyeurism," said Petaluma Police Lt. Tim Lyons of suspect Javier Antonio Martinez.

Martinez, 30, says he works in a dean's office at UC Berkeley.

When granted entrance to the room, police found and photographed one of the cameras pushed beneath an adjoining hotel room door, recording a man on the other side. They say that camera had been recording for five hours.

Here is the small, high-def endoscopic camera that @petaluma_police say they found under the adjoining guest room door of the local @sheratonhotels ---recording proceedings next door. Camera had been rolling 5 hours, PD says. #abc7now pic.twitter.com/0SS7GiK39G

"He is surprised," said Lt. Lyons in describing the victim. "He met him (Martinez) in the lobby. Our suspect determined where his room was. Asked to be moved to a room next to him."

When police arrested Martinez, they found a computer, a hard drive, a spy pen, two of the cameras, and a computer.

Martinez spent a lot of time in Sheraton hotels, said Lyons. "He is one of their elite club members."

Now, detectives must look through every file to see if he had other victims.

"What if he was recording women or children?" ABC7's Wayne Freedman asked.

"It will mean more serious charges. We must go through the data," said Lyons.

Investigators say staff called them after suspicious behavior. In the suspect's room, @petaluma_police found this camera, snaked under into the room next door. PD says suspect had asked for a room change to be closer to his target. Evidence photo. #abc7now @sheratonhotels pic.twitter.com/YG26DJphk1

It was the hotel that became suspicious and called police, who then knocked on the suspect's door.

In the meantime, Javier Martinez is out of jail on bail. He did not return calls from ABC7 News.

Police say he told them "he was doing it for reality TV, but we have nothing to support that. Probably an excuse."

Sheraton has referred all questions to the Petaluma police, who say they handled this well.

So far, this is a misdemeanor case, but police believe there may be more victims.

Comment from @sheratonhotels - "We are aware of the situation that was reported...Because this matter is under investigation by the Petaluma Police Department, it would be inappropriate to comment further." #abc7now