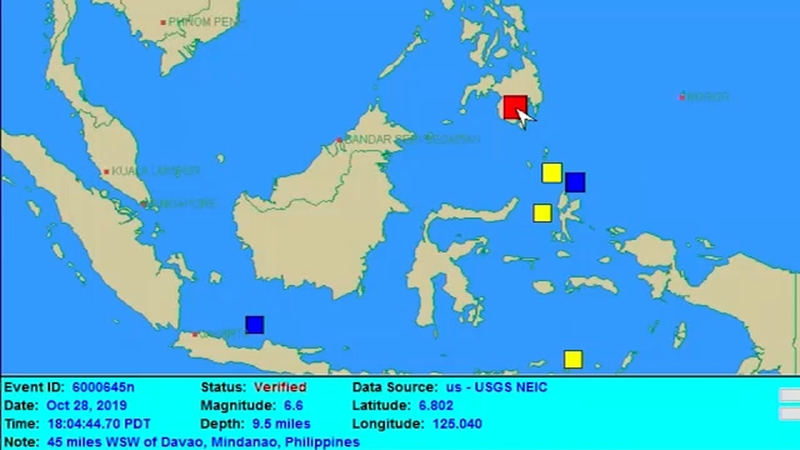 DAVAO, Philippines -- A powerful earthquake shook the southern Philippines on Tuesday, killing one person, injuring dozens and sending people dashing out of homes and buildings in a region still recovering from recent strong quakes.

The 6.6 magnitude earthquake was caused by movement in a local fault about 7 kilometers (4.3 miles) deep about 25 kilometers northeast of Tulunan town in Cotabato province, the Philippine Institute of Seismology and Volcanology said. The U.S. Geological Survey had the same measurement, adjusted from a preliminary 6.8.

The Office of Civil Defense reported a 66-year-old man died from head injuries apparently after being hit by a falling object in South Cotabato province's capital city of Koronadal, where 30 other people were injured as they dashed out of homes, offices and shopping malls as the ground shook.

More than a dozen people were injured in M'lang town in Cotabato and Cagayan de Oro province, according to OCD.

Several cities and towns suspended classes to allow inspections of school buildings. At least three government and privately owned buildings damaged in another quake earlier this month sustained further damages and remained off limits to the public.

The Philippines lies in the so-called Pacific "Ring of Fire," an arc of faults around the Pacific Ocean where most of the world's earthquakes occur.