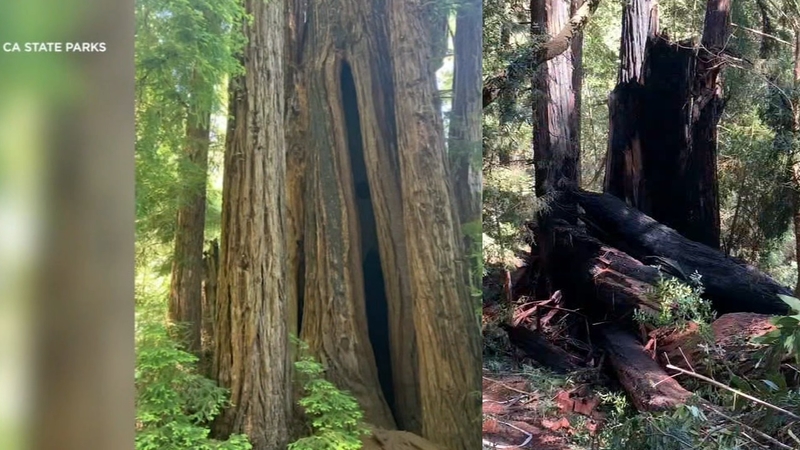 MARIN COUNTY, Calif. (KGO) -- A tragic loss in the North Bay, where one of the last remaining old growth redwoods in Marin County was destroyed by a fire this week. The Pioneer Tree inside Samuel P. Taylor State Park was hundreds of years old. Fire officials believe an illegal campsite could be to blame.

Fire crews were still on scene of a blaze on Friday which destroyed an iconic piece of Samuel P. Taylor State Park, known as the Pioneer Tree. The loss is as massive as the mighty redwood itself.

"It's like a loss of a family member for the staff and for the members of the community," said California State Park Ranger Vince Anibale.

Anibale says Pioneer Tree was one of the few remaining old growth redwoods in the park. Pictures show the tree before the fire, standing 200-feet tall and believed to be at least 800-years-old.

"It's just upsetting because they're so old and so big, they harbor great life so losing one is a disappointment," Anibale added.

RELATED: Cal Fire says 'there is no longer a wildfire season.' Island fire near Antioch emphasizes that fear

"The tree collapsed while our folks were there due to amount of fire inside the tree," said Weber.

Weber believes the fire, first discovered on Thursday, was likely started by an illegal campsite.

"Not only is is illegal, it's just plain stupid. We're in an extended drought, people need to be fire safe," said Weber.

Video captures the moment part of the roof gave into this massive four-alarm fire in Campbell at a vacant 50,000 sq. ft building.

For some visitors, the loss so great they brought flowers to the front gate kiosk, even a condolence card.

Park volunteer Kathryn Dunning shared photos of herself standing inside the beloved tree.

"I walk the trail once a week, I've been inside the tree, so have my grandkids and friends It's a big loss," said Dunning.

The tree has survived other fire before. Park rangers are now looking for information about who may have started the fire. But for now, it's a time to grieve the loss of a very old friend.