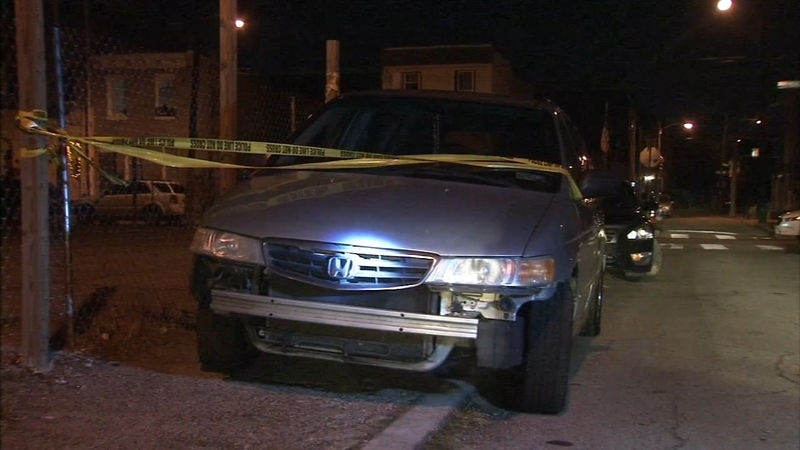 PHILADELPHIA -- Police are searching for the hit-and-run driver who ran over a homeless couple, killing a woman lying on a mattress in the Kensington section of Philadelphia.

The woman sped off, turning onto Cambria. But she lost control and jumped the curb running over a homeless man and woman.

"This 22-year-old female was lying on the mattress in the sidewalk with a male friend of hers when the striking vehicle jumped the curb striking both of them," Small said.

Kensington resident Samantha Alesira described what she saw at the scene.

"He was fine. He was walking. Her whole face was gone," Alesira said.

This area of Philadelphia has long had a problem with homelessness.
"People sleep here at night and stay here all day long because they have nowhere to go," Alesira said.

People live in tents along the street and under overpasses. The city recently evicted those sleeping on the street, offering them beds in shelters and addiction services.

After striking the couple, the suspect once again sped off. The driver of the vehicle she initially rear-ended followed close behind.

The chase would end at 2800 Coral Street where the woman took off on foot and left her vehicle.

Police ran a registration address to Coral Street. They believe they have an ID, but the driver has yet to be found.
"She left the scene three times in this particular fatal auto accident," Small said.

Police say they have witness accounts, as well as surveillance cameras that may have captured some, if not all, of the deadly hit-and-run.
Report a correction or typo
Related topics:
pennsylvaniahit and runhomelessu.s. & worldaccident
Copyright © 2021 WPVI-TV. All Rights Reserved.
More Videos
From CNN Newsource affiliates
TOP STORIES