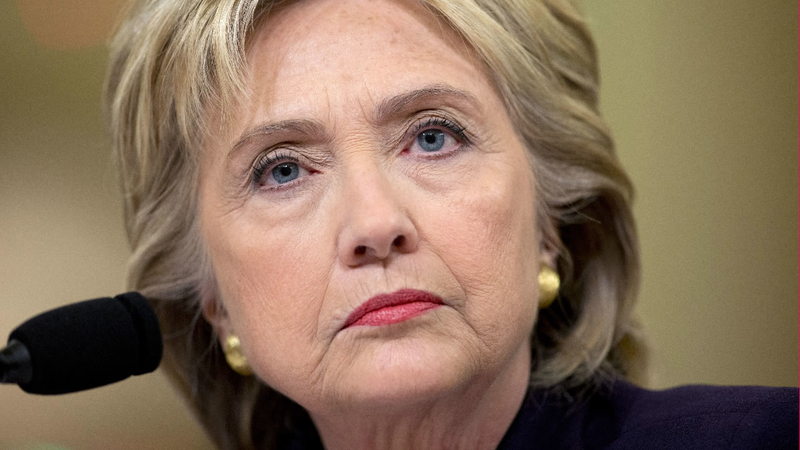 WASHINGTON (KGO) -- More than 10 hours after a hearing on the Benghazi attacks began, Democratic presidential candidate Hillary Rodham Clinton is expressing hope that statesmanship will overcome partisanship as lawmakers investigate the 2012 attacks that killed four Americans, including the U.S. ambassador to Libya.

Clinton firmly defended her actions on Benghazi as she came face-to-face Thursday with the Republican-led special investigation of the Sept. 11, 2012, attacks in Libya, hoping to put to rest the worst episode of her tenure as secretary of state and clear an obstacle to her presidential campaign.

Clinton, the front-runner to win the Democratic nomination, kicked off a long day of questioning with a plea that the United States maintain its global leadership role despite the threat posed to U.S. diplomats. She hailed the efforts of the four Americans who died in the attacks, including the first ambassador in more than three decades, but told the House Benghazi Committee that the deadly events have already been exhaustively scrutinized. "We need leadership at home to match our leadership abroad, leadership that puts national security ahead of politics and ideology" Clinton said in her opening remarks, the closest she came to directly rebuking her GOP investigators.

The committee grilled Clinton saying, someone needs to be held accountable for the deaths of four Americans. The committee wants to know why requests for more security in Benghazi were denied and why U.S. personnel stayed in Libya when there were obvious risks. " I just have to respectfully disagree. Many security requests were fulfilled. We would be happy to get that information for the record, so I can't really tell what it is you're putting on that poster, but I know that number of the security requests were fulfilled," Clinton said.

Clinton said requests for additional security were handled by security professionals within the department, but she never saw, approved or denied them.

Clinton also acknowledged what happened in Benghazi was a tragedy, but that U.S. diplomats must continue to represent America in dangerous places.

The hearing comes at a moment of political strength for Clinton. On Wednesday, a potential rival for the Democratic nomination, Vice President Joe Biden, announced he would not join the race. Clinton also is riding the momentum of a solid debate performance last week. The Benghazi panel's Republican chairman says he won't call Clinton to appear a second time.

But Rep. Trey Gowdy of South Carolina started the hearing with a series of questions that he said remained unanswered: Why was the U.S. in Libya, why were security requests denied, why was the military not ready to respond quickly on the 11th anniversary of 9/11 and why did the Obama administration change its story about the nature of the attacks in the weeks afterward?

"These questions linger because previous investigations were not thorough," Gowdy said.

Clinton addressed some of these matters early on. She stressed a need for diplomats to advance U.S. interests in the world, even in dangerous places, and said perfect security can never be achieved. She noted the various attacks on U.S. diplomatic and military installations overseas during the presidencies of her husband, Bill Clinton, in the 1990s and Ronald Reagan a decade earlier.

The U.S. military campaign against Moammar Gadhafi in 2011 helped prevent "genocide," Clinton asserted, noting the Libyan dictator's threat to hunt down opponents like "cockroaches." The American-led intervention came after requests for assistance from allies in Europe and the Arab world, and extensive study and discussion by the U.S. government, she said.

Wearing a dark suit, Clinton appeared somber and determined before the panel, her jaw often clenched while she wasn't speaking. She nodded occasionally, particularly as the committee's top Democrat, Rep. Elijah Cummings of Maryland, described the entire probe as a partisan campaign replete with implausible conspiracy theories.

The Republican criticism has included contentions by some lawmakers that Clinton personally denied security requests and ordered the U.S. military to "stand down" during the attacks, or that her agency was engaged in an elaborate gun-running scheme in eastern Libya. None of these were substantiated in the independent Accountability Review Board investigation ordered by Clinton after the deadly incident, and seven subsequent congressional investigations.

Gowdy is engaged in his own balancing act, portraying the panel as focused on the facts after comments by fellow Republicans describing the inquiry as an effort designed to hurt Clinton's presidential bid. Democrats have pounced on the remarks, and pointed out that the probe has now cost U.S. taxpayers more than $4.5 million and, after 17 months, has lasted longer than the 1970s Watergate investigation.

Thursday's hearing was expected to last the whole day, with breaks. Clinton was certain to face questions about her use of a private email account and server while serving as President Barack Obama's chief diplomat, another issue that has beset her campaign.

A new Associated Press-Gfk poll shows the public mixed on Clinton and Benghazi. Four in 10 say they neither approve nor disapprove of how she has answered questions about the attack, while 20 percent approve and 37 percent disapprove.

Americans also are divided on Clinton's emails. More than half of those polled view her use of a private server as a minor problem or no problem at all, compared with 1 in 3 who think it is a major problem. Nearly two-thirds of Republicans call it a major problem.

In the weeks after Benghazi, Clinton took responsibility for the incidents. In recent months, she has said her use of a private email server was a mistake.

At #BenghaziCommittee hearing, Rep. Trey Gowdy assures @HillaryClinton the investigation is not about her: pic.twitter.com/YpWMKUf9qd