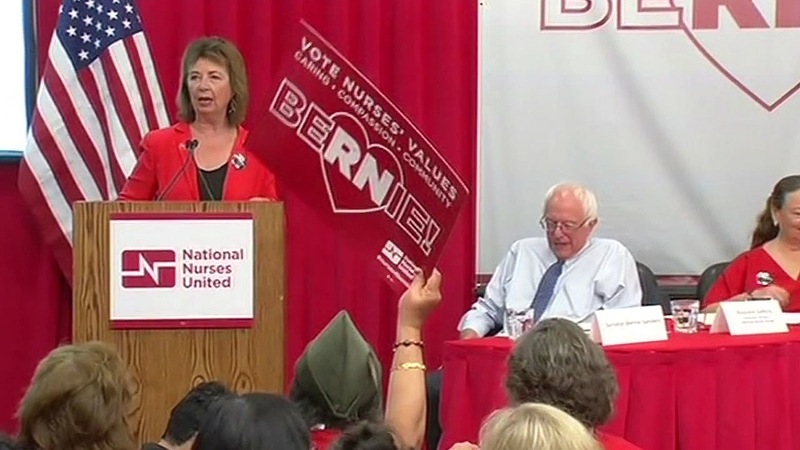 EMERYVILLE, Calif. (KGO) -- Democratic presidential candidate Sen. Bernie Sanders, I-Vt, visited the Bay Area on Monday to rally supporters. He had been considered a long shot against former Secretary of State Hillary Clinton, but just picked up support from a major national organization.

This nurses union, at about 180,000 members, isn't one of the largest unions in the country, but because they are one of the first to give this endorsement, political observers say it could actually prompt other unions to look at Sanders as a viable option against Democratic frontrunner Clinton.

"We have got to get millions of people to jump in to vote and actively participating. And I believe that more than any other campaign out there, this campaign has the excitement," Sanders said.

For political observers, this is significant that a national union has come out so early in favor the progressive firebrand senator from Vermont.

Daniel Newman is the president of MapLight Foundation in Berkeley - they track political spending nationwide.

He said, "Sen. Sanders has been portrayed initially as not in the main stream of presidential candidates. And I think having a national union endorsing him helps move the perception for the Sanders' campaign that he is more than someone who can get more endorsements," Newman said.

Sanders has been drawing large crowds in recent weeks, including tens of thousands of supporters over the weekend at stops in Seattle and Portland.