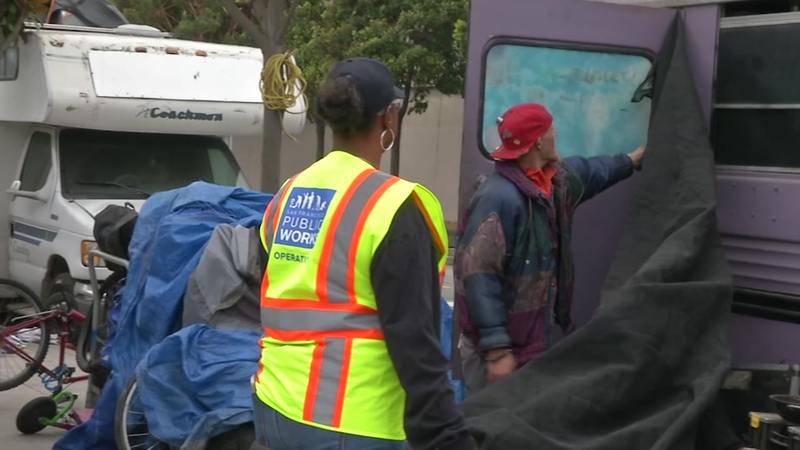 SAN FRANCISCO (KGO) -- ABC7 News is teaming up with dozens of media outlets for the San Francisco Homeless Project in a joint effort that aims to hold leaders accountable for the city's homeless problem.

It is a scene repeated all around the city, according to the Department of Homelessness and Supportive Housing. They say 7,500 people currently call the streets of San Francisco home.

Nearly a quarter of the Bay Area's total homeless population is squeezed into just 49 square miles.

Guillermo Perez is a supervisor who oversees those daily clean-ups for the San Francisco Department of Public Works. He's been cleaning these streets for 17 years.

"We see a little bit of everything, we see people with mental health issues, with drug addiction problems," said Perez.

He says he's seen it all.

"From mouse droppings to unsanitary conditions, some people are hoarding," said Perez. "You know, illegal activity at some of these encampments, whether it's illegal sex trade or drug selling."

Police keep a watchful eye over the situation because workers never know what they're going to find.

"We have came across some weapons, some knives, guns, samurai swords," added Perez.

He tries not to lose sight these are human beings at their lowest point.

"I have encountered people I've went to school with," Perez said, "And it really breaks my heart to see these people in these kind of environments and these conditions."

The city has been cracking down on the tent encampments, breaking up the largest sites, which forces the homeless to find new places to take cover.

"We're seeing a lot more families in campers and a lot more elderly people in campers," said Tessa Jones, a supervisor for 24 years with the Department of Public Works.

She and her team clear the sidewalks of debris from the growing number of recreational vehicles that are lining city streets.

Jones can relate to the homeless in encampments. She used to be one of them.

Her time on the streets was short-lived. Just two months. But long enough to help her understand what these people are going through.

"I feel for them," she said, "A lot of times I understand how they became homeless, because you know, I was homeless."

When one person's trash becomes someone else's most prized possession, Jones has to step in and help them decide what to keep and what they are going to have to live without.

"What I try to do is get them to downsize, you know," she said. "All of their immediate things, like their clothing, their food, their documents and their bedding you know we allow them to take those things because they need regardless of where they are going to go."

Some of the homeless Jones and Guillermo meet, take them up on the city's offer to get help. But, most do not. They just pick up their camp, and move to another block. Where the street cleaning cycle will repeat itself on another day.