Trump promotes his new luxury hotel along with campaign 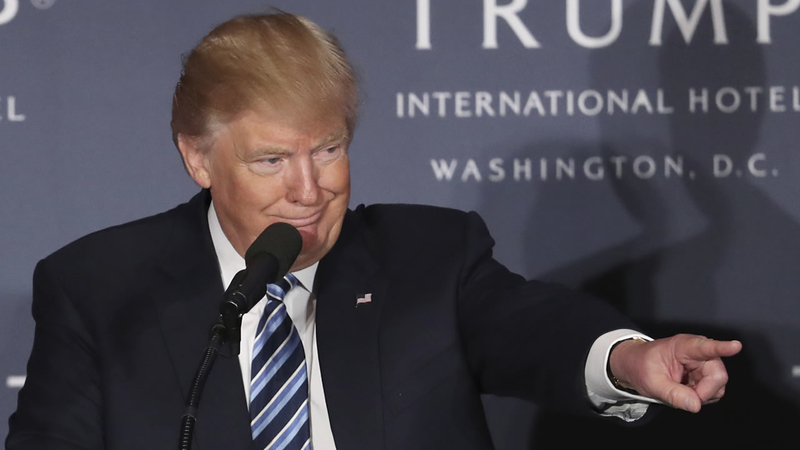 Donald Trump promotes his new luxury hotel along with campaign

WASHINGTON -- With his White House dreams increasingly in question, Donald Trump is spending precious campaign time promoting his private business in the final weeks of the long race. Hillary Clinton, meanwhile, is using his appearances to undermine his business credentials out on the campaign trail, accusing him of having "stiffed American workers."

Less than two weeks before Election Day - and with polls showing him trailing in many battleground states - Trump took a break from campaigning Wednesday morning to formally open his new hotel in Washington. His remarks at the hotel, which has struggled to fill rooms amid the controversy surrounding his presidential bid, followed a visit Tuesday to another of his properties, the Doral golf course outside Miami.

"Under budget and ahead of schedule. So important. We don't hear those words so often, but you will," said Trump, linking the hotel redevelopment to his promised performance as president. "Today is a metaphor for what we can accomplish for this country."

Though the GOP nominee focused his remarks on his political message, the event was heavy with marketing, too. Standing under glittering chandeliers, top company executives, including his daughter, touted the hotel. After delivering brief political remarks, Trump and his family headed to the hotel's grand lobby where they cut a wide red ribbon with golden scissors before flying to North Carolina for what his campaign billed as an urban policy speech.

As Trump cut ribbons, Clinton was slamming Trump's business practices at a Florida campaign rally, saying he built his empire with Chinese-manufactured steel, overseas products and labor from immigrants in the country illegally. Later in the day, she was being joined by restaurateur Jose Andres, who pulled out of the Washington hotel to protest Trump's anti-immigrant rhetoric. Trump and Andres are currently locked in litigation over the deal.

Trump's unusual travel schedule, coming amid signs that the controversy surrounding his campaign has hurt his corporate brand, raises questions about whether the GOP nominee has begun to turn some of his focus to postelection plans.

Rooms at the overhauled $212 million hotel that bears his name at Washington's Old Post Office Pavilion have been heavily discounted and smartphone data suggest fewer people are visiting his properties compared to rival venues nearby. A new Facebook live show produced by his campaign has heightened speculation that Trump may try and offset any losses with advertising revenue from a new a media network - a plan he denies.

Trump supporters defended the stops, arguing they show how he would govern as president.
"I think there was a symbolic message here that if you want business as usual and bureaucracy as usual, vote Hillary," said former House Speaker Newt Gingrich, a Trump backer.

Clinton, too, has turned some of her focus to what happens after Nov. 8, though her efforts assume she wins. Deep in transition planning, people familiar with her effort say she plans to impose strict ethics rules on how lobbyists may participate on her team. In recent days, she's begun expanding the scope of her campaign to help down-ballot Democrats - her party sees an opportunity to win control of the Senate and reduce its deficit in the House - and retool her campaign message to emphasize unifying the country after a divisive race.

"What Trump has done is to make it possible for people who had racist, sexist, and all kinds of prejudices and bigotry to put them right out there," Clinton said on the "Breakfast Club," a syndicated radio show based in New York City. "I'm not going to be able to wave a magic wand and change everybody's thoughts."

Wednesday was the candidate's 69th birthday, a milestone she celebrated a day early on Univision's entertainment news show "El Gordo y La Flaca," where she was feted with a bottle of tequila and a large cake featuring her face. In her appearance on "The Breakfast Club," a syndicated radio show popular with African-American voters, singer Stevie Wonder serenaded the woman he called "Madam President Clinton."

Trump, meanwhile, dispatched his running mate, Mike Pence, to play political defense in Utah - a state that hasn't backed a Democrat for president in 52 years.

Besides Utah, Pence also was stopping in the swing states of Nevada and Colorado before he heads on Thursday to solidly Republican Nebraska, a state that awards some of its electoral votes by congressional district. His rally in Omaha may be aimed at shoring up support in the one district that Clinton could potentially win.