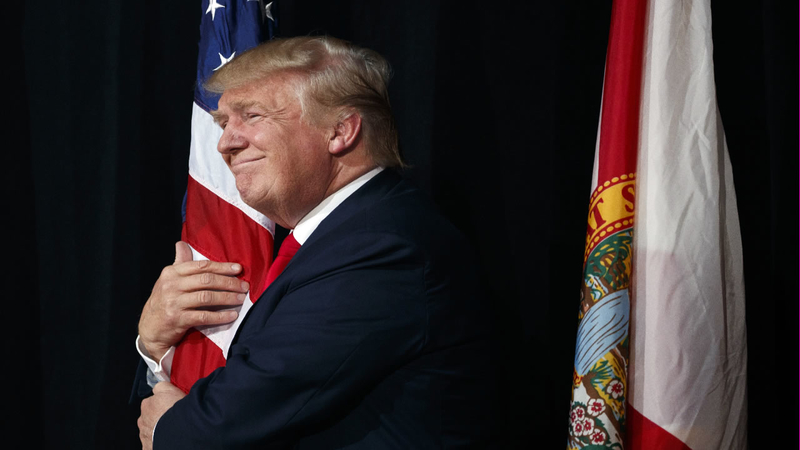 WASHINGTON -- Donald Trump is mocking Vice President Joe Biden's wish to bully the Republican nominee, saying that Biden is only a tough guy "when he's standing behind a microphone by himself."

Biden, criticizing Trump's vulgar remarks toward women, said last week that he wished he could take Trump "behind the gym" to settle things.

"Mr. Tough Guy!" Trump teased. "You know when he's Mr. Tough Guy? When he's standing behind a microphone by himself!"

Trump's rally in Tallahassee was the final stop of a three-day blitz through Florida, a state vital to his White House hopes.

The latest on the Elections (all times local):

Hillary Clinton and Donald Trump have stopped personally raising money for their presidential campaigns so that they can focus on campaigning in the final two weeks before Election Day.

Clinton on Tuesday was making what her campaign says will be her last fundraising stop, in Miami. Trump attended his last major scheduled fundraiser in Las Vegas last week, The Washington Post reported.

But that doesn't mean the campaign cash will stop flowing. Clinton's surrogates will continue attending fundraisers on her behalf, and both candidates have robust online fundraising operations.

Trump has had a turbulent relationship within his own party, but his fundraising has benefited GOP candidates up and down the ballot, just as Clinton's has on the Democratic side.

Mike Pence may be spending the day campaigning in the crucial swing state of Ohio - but that's not changing his World Series loyalty.

Reporters aboard the Indiana Gov.'s press plane rolled a baseball up to where Pence was seated, asking if he was backing his beloved Chicago Cubs or the Cleveland Indians in a World Series that starts Tuesday night in Cleveland.

Pence later pitched the ball back into the plane's press section, his throw so high that it struck the plane's ceiling.

He wrote on the ball "Two great teams - It's gonna be a great World Series ... Go Cubs Go!"

Pence then signed the ball over the inscription "lifelong Cubs fan."

RELATED: East Bay voter turnout could be bigger than ever

A hacked email shows a key aide to Hillary Clinton was concerned about President Barack Obama's public statement that he first learned about Hillary Clinton's use of a private email sever through news reports. But the White House says Obama was being truthful.

The March 2015 email released by Wikileaks showed Cheryl Mills writing, "We need to clean this up," adding that Obama has "emails from her" sent from Clinton's non-government address.

White House spokesman Josh Earnest said Tuesday that Obama exchanged emails with his then-secretary of state, but the president had no knowledge of where Clinton's server was located or what sort of arrangements had been made to retain her emails.

Documents released from the FBI's now-closed investigation into Clinton's email use previously revealed she messaged with Obama.

Hillary Clinton danced, shared her favorite cookie recipe and was feted with a rendition of "Happy Birthday" by a Mariachi band in an interview with Univision's "El Gordo y La Flaca."

Clinton appeared on the Spanish language program a day before her 69th birthday. She was given a bottle of tequila and a large patriotic birthday cake featuring her face and the White House on set of the entertainment news show in Miami.

Clinton asked whether she should "come back every week. What do you think?"

The Democratic presidential nominee vowed to seek comprehensive immigration reform "as soon as I get into the White House. I'm not waiting."

Donald Trump is pledging to bolster the government's investment in the space program - a boon to the Space Coast of Florida.

Trump made the declaration at a rally Tuesday in Sanford, not too far from the hub of the space program on Florida's Atlantic Coast.

He vowed to create new public-private partnerships to fund the program, which he said has benefited Americans by creating new technologies and more jobs for the region.

The airplane hangar rally in Sanford, Florida, left only one more stop for Trump of a three-day campaign swing in political critical Florida.

Donald Trump says his first presidential act would be to repeal the Affordable Care Act.

Trump told supporters at a rally in Sanford, Florida, that he would immediately "ask Congress to put a bill on my desk to get rid of this disastrous" program, adding "it will be so easy."

The Republican presidential nominee has said he'd give people more choice over their insurance plans but has not offered much in the way of specifics.

Trump has tried to seize upon the rate hike as a potent issue to reverse his slide over the campaign's final two weeks.

Former Secretary of State Colin Powell says he will vote for Hillary Clinton over Donald Trump.

The Republican and retired four-star Army general made his announcement at a fall meeting of a Long Island business association.

He is the latest in a series of Bush administration officials who have rejected their party's nominee.

Powell recently engaged in a public fight with Clinton when he denied her claim that he advised the Democratic nominee to set up a private email server as secretary of state.

Hillary Clinton is assailing Donald Trump for refusing to say he'll respect the outcome of the presidential election.

The Democratic nominee says in Florida that she has "serious doubts" about whether Trump understands the meaning of the president's oath of office to "preserve, protect and defend the constitution."

Clinton said Tuesday at a Coconut Creek rally that Trump is "attacking everything that has set our country apart for 240 years." She pointed to his refusal at the final debate to commit to conceding the race if he loses.

She joked that Trump would have called George Washington "a loser" for not wanting to be king.

During the rally, the crowd broke into a spontaneous singing of "Happy Birthday" ahead of Clinton's 69th birthday on Wednesday.

President Barack Obama is wrapping up a three-day swing through Nevada and California. He's campaigning and raising money for Democratic candidates in the Nov. 8 election.

The president is participating in a fundraiser benefiting the organization that coordinates efforts to elect Democrats to the Senate. Tickets for the event were $33,400. It's taking place Tuesday at the home of television writer, director and producer Ryan Murphy.

Democrats need to pick up four seats to take the Senate majority if Hillary Clinton wins and five If Republican Donald Trump wins.

A hacked email shows Hillary Clinton's aides lamenting last year that she was not more forthcoming about her use of a private email server.

The March 2015 exchange between Clinton campaign chairman John Podesta and political operative Neera Tanden was among more than 1,300 stolen emails released Tuesday by the WikiLeaks organization.

The day after The New York Times first reported that the former secretary of state had used a private email address, Podesta wrote that Clinton lawyer David Kendall and chief-of-staff Cheryl Mills had not been forthcoming on the facts.

Tanden described the problem as "a Cheryl special" and said Clinton's team was crazy not to have gone public about the issue months earlier. She then suggested the answer was that "They wanted to get away with it."

Clinton campaign communications director Jen Palmieri said Tuesday that Clinton has a plan to make health insurance more affordable. But, she said: "What we shouldn't do is what Donald Trump would do, which is throw away the gains we have made."

The campaign's statement comes after the federal government announced that premiums for some health plans will increase by an average of 25 percent.

Speaking earlier in Florida, Trump said that Obama's legislation is "just blowing up."

Donald Trump is praising veterans of the failed CIA-sponsored Bay of Pigs operation which tried to topple Cuba's Fidel Castro.

The Republican presidential nominee visited the Bay of Pigs Museum in Miami on Tuesday. He received an endorsement from the Veterans Association for the Bay of Pigs.

Trump said he was "in a room full of heroes." He said the veterans were "fighting for values that unite us all" during the 1961 invasion.

He sharply criticized President Barack Obama's move to restore some diplomatic ties with Cuba, though he has yet to spell out his own plan for relations with the island nation.

Trump's appearance at the museum was his second event Tuesday aimed at rallying Cuban-American voters in the key battleground of Florida. They have traditionally leaned Republican.

A celebrity strike force is fanning out for Hillary Clinton. And it's not just megastars helping on the campaign trail.

The stars stumping for Clinton include Jay Z and Jennifer Lopez. But Sean Astin, of "The Goonies" and Busy Philipps, of "Freaks and Geeks" are also getting people to the polls.

Phillips recently campaigned in Iowa. She said she came out because she is a "concerned citizen."

The campaign deploys prominent supporters as stand-ins for the candidate. They're known as surrogates. They work with celebrities who want to get involved to figure out how best to use them - considering their fan base as well as how much time they have to offer.

The Justice Department and FBI say they will have officials ready on Election Day to respond to potential crimes.

Justice Department officials will be monitoring conduct at certain polling places, and lawyers will be available to handle complaints regarding voter intimidation, discrimination and fraud such as vote-buying.

The FBI will also have a command center to monitor potential security threats related to the election. U.S. intelligence officials have warned of Russian efforts to use hacking to interfere with the election process.

The Justice Department has already warned that it will have fewer observers at the polls than in 2012 because of a Supreme Court opinion that gutted a key provision of the Voting Rights Act.

The exact number of observers will not be revealed until closer to Election Day.

Trump did not offer specific criticisms during a Tuesday meeting with Cuban supporters at his golf course just outside Miami.

Trump reversed his own position on Cuba during a September visit to Miami, which has a sizable Cuban-American population.

He had previously supported the decision to reopen diplomatic relations with the island nation. But he now believes the United States "needs to strike a better deal" and has vowed to scrap Obama's efforts.