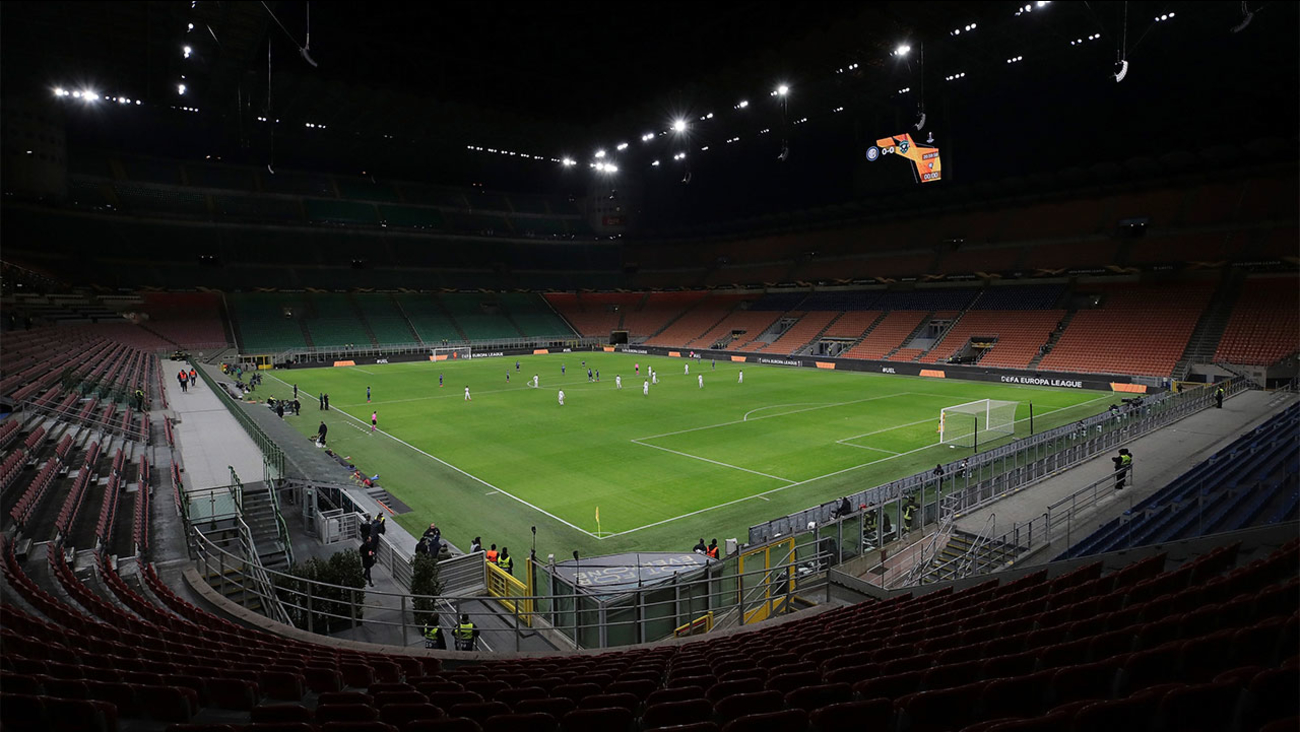 The seats are empty as a precaution against the coronavirus at the San Siro stadium in Milan, Italy, during a soccer match between Inter Milan and Ludogorets on Feb. 27, 2020. (Emilio Andreoli, UEFA via AP, File)

MILAN -- All sporting events in Italy will take place without fans present for at least the next month due to the virus outbreak in the country, the Italian government announced on Wednesday.

That will likely see the Italian soccer league resume in full this weekend after the calendar was pushed back a week.

Italy is the epicenter of Europe's coronavirus outbreak. More than 100 people have died and more than 3,000 have been infected with COVID-19.

The Italian government issued a new decree on Wednesday evening, with measures it hopes will help contain the spread of the virus.

SEE ALSO: Everything Americans should know about the new coronavirus

All sporting events throughout the country must take place behind closed doors until April 3. Schools and universities have been ordered to close until March 15.

Premier Giuseppe Conte posted a five-minute video on his Facebook page, reassuring people and saying that the decree was a way of assuring "responsible behavior."

Key games during the period includes Juventus' Champions League game against Lyon. The second leg of the round-of-16 match is scheduled for March 17 in Turin.

The decree also calls into question Italy's Six Nations rugby match against England in Rome on March 14. That match will either have to go ahead behind closed doors or be postponed. Italy's match against Ireland, which was scheduled for March 7, had already been postponed.

In tennis, Italy is set to play South Korea in a Davis Cup qualifier this weekend in Cagliari, Sardinia.

The Italian soccer league's governing body has yet to release a revised schedule but reports say the six Serie A soccer matches that were postponed last week will now be played this weekend. That includes one of the biggest matches of the season - the Juventus-Inter game, known as the "Derby d'Italia" or Italy's derby.

Inter's match against Sampdoria was one of four matches postponed the previous weekend. And the club's president Steven Zhang is facing disciplinary action for insulting Serie A president Paolo Dal Pino in an Instagram post reacting to the way the Italian league is handling the fallout from the virus outbreak.

"Playing in empty stadiums could be the only way to keep the league going until the end in light of the restrictions that the government is rightly indicating," Marotta said after a meeting at the Serie A headquarters in Rome, but before the decree was announced.

Four Serie A matches went ahead last weekend with fans present as they were taking place in areas that had not been affected by measures to control the outbreak.

A decree on Sunday extended the suspension of all sporting events in Lombardy, Veneto and Emilia-Romagna until March 8.