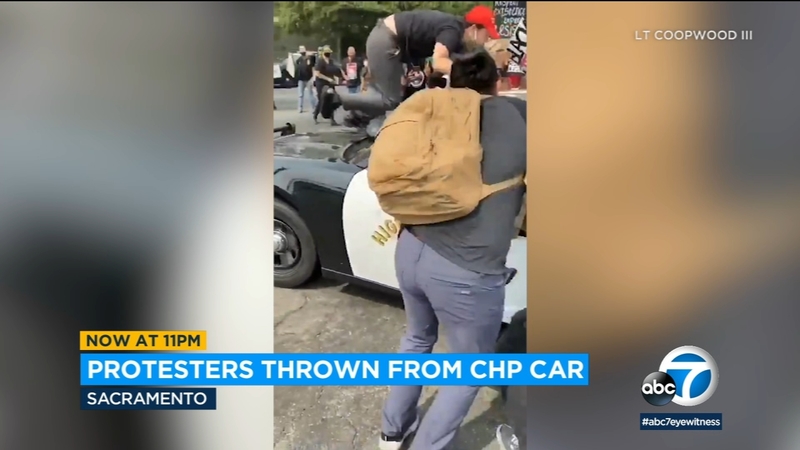 SACRAMENTO, Calif. -- As President Donald Trump visited Sacramento on Monday, protesters were involved in a confrontation with CHP officers in their cruiser.

Video shows an angry group surrounding the CHP cruiser and one person climbing on the hood.

The cruiser speeds off quickly to escape the hostile crowd and the person is thrown from the hood to the ground.

In its haste to escape, the cruiser narrowly avoids collision with another vehicle.

The cruiser circles around to pass the group and protesters are seen trying to approach the vehicle again. One man on roller skates kicks the cruiser before it drives off.

Hundreds marched across the Golden Gate Bridge protesting the deaths of George Floyd and Breonna Taylor, and the police shooting that left Jacob Blake paralyzed from the waist down.

The incident happened near McClellan Park, where Trump was meeting with Gov. Gavin Newsom for a discussion that centered around California's wildfires and climate change. The location is a corporate complex that includes a general aviation airport converted from a former Air Force base.

People in the crowd are seen carrying anti-Trump signs and one man is wearing a T-shirt that declares "Trump sucks."

Additional video shows paramedics treating the person who fell from the CHP cruiser.

The Sacramento Bee reports there was a separate incident involving a civilian vehicle and protesters near the Trump event. A green Volvo sped into a group of demonstrators gathered in the roadway near the airport and hit two or three people before speeding off.