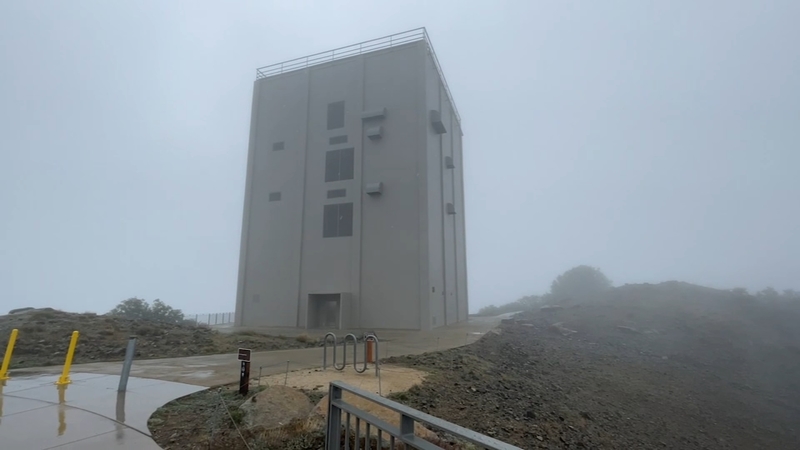 SANTA CRUZ MOUNTAINS, Calif. (KGO) -- A two yearlong restoration project has just been completed to preserve a Bay Area landmark high atop the Santa Cruz Mountains. The old radar tower on Mount Umunhum serves as a reminder of U.S. Soviet tension during the Cold War years that ran from 1947 to 1969.

On some days, shrouded in clouds and mist, the 5-story concrete building blends right in, almost invisible. However, on a clear day, the massive structure at 3,500 feet atop Mount Umunhum in Santa Clara County is hard to miss.

"Throughout the Bay Area, you can look up at Mount Umunhum and see the box on top of it," said Brian Malone, assistant general manager of the Midpeninsula Regional Open Space District. "And it was the primary symbol of what the Air Force base was here for, the radar tower that was watching our skies."

A U.S. citizen with ties to the Bay Area is speaking to ABC7 News about his journey of being stuck in Ukraine not far from the Polish Border.

With its radar antenna on top, the tower was used starting in 1958 to watch for the approach of Soviet bombers during the Cold War-era following World War II. This was home to Almaden Air Force Base, which closed in 1980. The tower began to deteriorate, endangering visitors to the summit when the land was later acquired by the Midpeninsula Open Space District.

"It was leaking," said Malone. "There was actually all the paint covering, which had lead in it and was falling off, and even pieces of concrete were falling off so we had to have the entire area around it closed for safety."

Veterans and preservationists lobbied for the historic tower to be restored. The Umunhum Conservancy collected individual donations totaling $100,000 toward the $2 million cost. The cracks were repaired and the exterior sealed with a coating the same color as the original, which the military calls dark warm gray. The open space preserve's 100,000 yearly visitors now have full access to the east summit and the trails featuring native plants.

RELATED: Where is Ukraine located? A brief look into one of Europe's largest, poorest countries

The tower itself is sealed but well ventilated to extend its life, with maintenance, for another 30 to 50 years.

Even though modern technology has made the old radar installation obsolete, the fact that it has been restored and will be standing here for many decades to come will be an important reminder for future generations of the importance of vigilance.