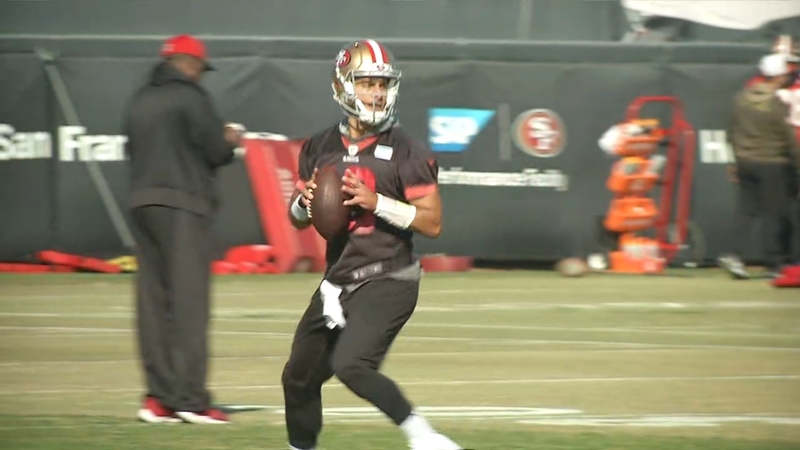 49ers prep for 3rd meeting against Rams this season

SAN FRANCISCO (KGO) -- It is championship Wednesday around the NFL and as the 49ers begin a new practice week, San Francisco is once again one win away from the Super Bowl. All they need to do is beat the NFC West Champion Los Angeles Rams for a third time this season.

After a 3-5 start to the season, not many thought the 49ers would be here, but for those looking for a turning point in the season try the Week 10 game on Monday, Nov. 15. San Francisco was dominant in a 31-10 victory over the Rams and from there the 49ers have made their playoff push.

"When you're going against a team, like us going against the Rams or them versus us, there's not much to soak in," said 49ers head coach Kyle Shanahan. "We knew what the tape was going to look like before we turned it on. And they are the exact same way, so when you have something like that, I think it makes for a little bit more fun of a football game, because it's truly what it's about."

As for Sunday's NFC Championship, yes the 49ers have won six straight games against the Rams and while there is confidence in that, this match-up down in LA is for the right to play in Super Bowl LVI.

"There's a lot of football that they've played throughout this whole season, so you don't want to bog yourself down and be too overwhelmed with all the stuff," said quarterback Jimmy Garoppolo. "So I think there is a fine line of you want to study the tape as well as you can. And we know these guys as well as possible, playing them for a third time now, nothing will really surprise us, I wouldn't say."

One other major storyline that has played out over the week, is the 49ers Faithful taking over down at SoFi Stadium this weekend.

"The Faithful? They travel tremendously. When you can get your fans behind you like that on a road game and we knew it before the game even started, there was a lot of red, you could see it, but once we started making plays and they started getting loud, it just changes the momentum of the game, I think. And you could feel it on the sideline," said Garoppolo. "It's not something that you could really put your finger on and you can't see specifically, but you could feel, you could hear it. And our team responds well to that. So hopefully the Faithful will be out there loud and proud. And I know they're trying."

The Faithful packed The Bar in Green Bay. Next stop, Tom's Watch Bar in LA!