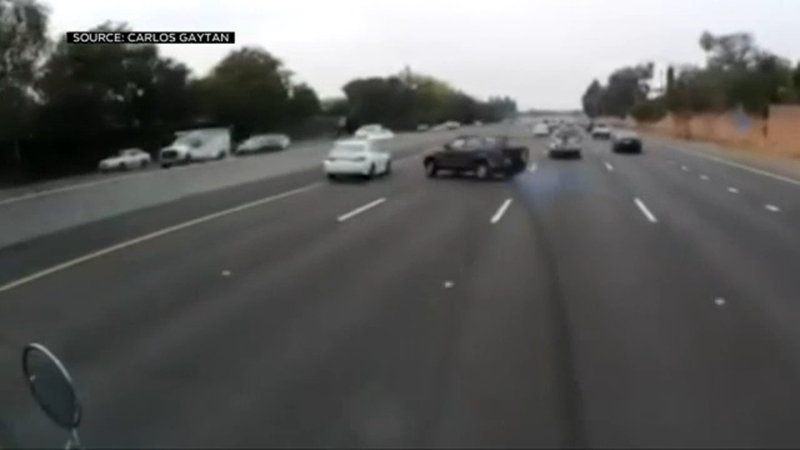 SACRAMENTO, Calif. -- An apparent road rage incident was caught on camera in Sacramento, where a driver "brake checked" another vehicle on Highway 50, causing the other motorist to lose control and slam into the first car.

Footage from a passing vehicle's dashboard camera shows the second driver, in an SUV, unsuccessfully trying to swerve out of the way of the car in front. The SUV ends up T-boning the car, sending it into a spin that ends with it hitting the median.

Whether anyone was seriously injured in the crash was unclear.

"It just amazes me because it could have been a lot worse," Carlos Gaytan, whose camera captured the collision, told KOVR-TV in Sacramento. "He could have hit those other vehicles that were in front of him when he lost control, I mean it could have been three or four vehicles involved plus mine."
Report a correction or typo
Related topics:
trafficnorthern californiachpcalifornia highway patrolfreewayroad ragecrash
Copyright © 2022 KABC Television, LLC. All rights reserved.
TOP STORIES
Supreme Court Justice Stephen Breyer to retire
Triple stabbing suspect killed in Hwy 85 crash, police say
WATCH TODAY: Newsom to give update on zero-emission investments
San Jose becomes 1st in US to require gun liability insurance
Scientists monitoring new omicron subvariant BA.2
California likely to extend paid sick leave amid COVID pandemic
EXCLUSIVE: Mom reacts to murder charge in daughter's overdose
Show More
2 cases of omicron sub-variant BA.2 detected in Santa Clara Co.
Officials respond to percentage of CA nursing home staff boosted
Bay Area Frenchie reunited with owner after gunpoint robbery
Apple CEO allegedly stalked by woman who showed up at house
7-year-old SF girl and mom pray for miracle to avoid eviction
More TOP STORIES News