Use of force questioned after video of Salinas police beating surfaces 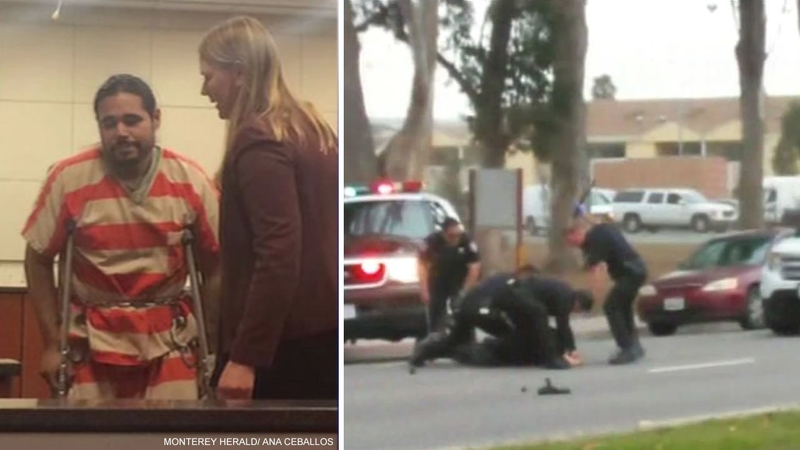 Use of force questioned after video of Salinas police beating surfaces

SALINAS, Calif. (KGO) -- A new video has surfaced online, showing a man after he was beaten repeatedly by Salinas police with batons.

Police say the man was high on drugs. Relatives say he needed mental health care. A city council member is now calling for a federal probe.

Salinas police say there is more to this story than just the videos. Their investigation into the incident continues, including an evaluation into the use of force.

A new video a citizen recorded Friday night shows Salinas police putting a hood over a man's head. Cops call it a spit sock, a nylon covering to protect them from bio-hazards while dealing with people on drugs.

Under that sock was 28-year-old Jose Velasco. Minutes earlier, Velasco was hit repeatedly on the arms and legs by batons after he removed the Taser from an officer's belt. He was in court Wednesday morning using crutches.

Police said Velasco had tried to throw his mother into a busy street.

"They're saying my son did try to kill me. No, he didn't. I called for help for my son. I didn't call for help for me," said Jose Velasco's mother Rita Velasco.

This incident has sparked new criticism of Salinas police for excessive force. There were four officer involved shootings last year. One has led to a wrongful death suit.

"This is a person who was high on meth and alcohol, who was violently resisting arrest and had attacked multiple people," said Salinas police spokesman Spencer Critchley. "The way to judge use of force is is that level of force necessary to stop the threat?"

Salinas police will be getting body cameras. The five officers subduing Velasco didn't have them. Three officers did have crisis intervention training.

"This incident that took place at the location of one the busiest streets in this city, 24/7 heavy traffic, was pretty much what saved Jose Velasco, this young man's life because of so many witnesses," said Salinas city council member Jose Castaneda.