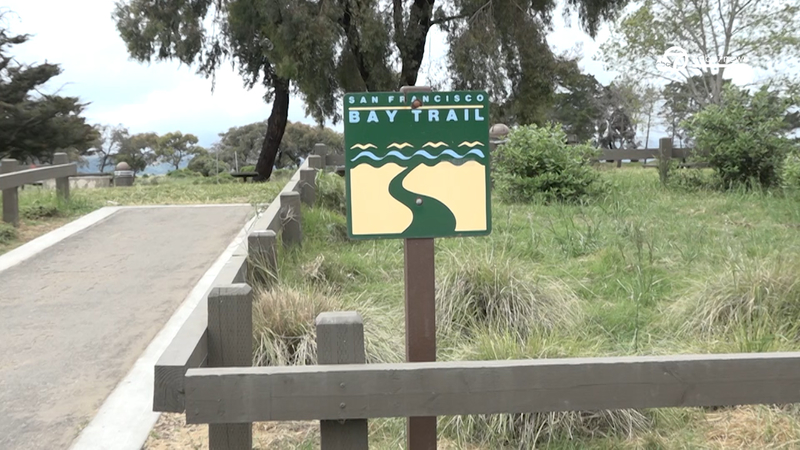 RICHMOND, Calif. -- The San Francisco Bay Trail is giving bicyclist and hikers a gift for the trail's 30th anniversary. The six-mile path will connect the North Bay to the East Bay by converting a Westbound shoulder lane to a recreational path.

A move-able concrete barrier system called the "zipper-tuck" will transform the Westbound shoulder of the upper deck and separate traffic from bicyclist and pedestrians.

The ten foot wide path will begin on Castro Street in Richmond and extend to Grange Avenue in San Rafael.

The new development to the Bay Trail provides a great option to beat the traffic and allow commuters to bike, run, or walk to and from the North and East Bay.

"It is an exciting time now where people get on the trail and they are excited about all this access and the Bay is where they want to be at. It is a way of life in the Bay Area,"
said Lee Hou from the Metropolitan Transportation Commission.

The San Francisco Bay Trail is full of breathtaking views of the Bay and connects forty-seven Bay Area cities.

"The exciting thing here in Richmond is the Bay Trail is going to open across the Richmond-San Rafael Bridge linking the East Bay and the North Bay and that is going to happen in August," said Bruce Beyaert, Chair of Trails for Richmond Action Committee. "The Bay Trail serves as transportation for commuting and it's very helpful. It is also a recreational outlet for everyone who works, lives, and plays in the city of Richmond."

Richmond has over thirty-five miles of the Bay Trail built which is the most of any city in the Bay Area.

"The vision of the Bay Trail is essentially 500 miles of biking and walking trails that circles the whole San Francisco Bay and crosses all the toll bridges through the Bay Area," said Hou. "We have 355 miles of the Bay Trail on the ground today which leaves about 145 left."

The genesis of the Bay Trail dates back to the 1960's when "Save The Bay", a group of advocates, helped create a legislation to prevent cities and corporations from filling the bay.
A state agency, The Bay Conservation Development Commission (BCDC), was established to plan and regulate over the bay and its shorelines for future generations.
Shortly after four miles of trail was completed along the Bay. In 1989 a plan was formed and adopted by The Association of Bay Area Governments (ABAG) and thirty years later 355 miles are officially on the ground.

"The Bay Trail really showcases the City of Richmond's shoreline which is a very historic place. It links together a necklace of 12 shoreline parks, city parks, regional parks, state parks and the National parks," said Beyaert. "When T.R.A.C. was formed in 1999 Richmond had twelve miles of existing Bay Trail so it took us twenty years to get from twelve miles to thirty-five miles. It has been a really complicated project to complete the Bay Trail."

T.RA.C. has installed thirty interactive exhibits explaining the history of Richmond's shoreline and how the Bay trail is home to a substantially amount of wildlife.

Kurt Schwabe, a photographer, has been enjoying the Bay Trail for six years. "What attracted me to it when I realized that there was one when I saw a sign on the trail in Marin and I didn't really think about how the whole Bay Area is connected by this one Bay. If there could be this one trail that brings it all together is fascinating to me," said Schwabe. "I would take several images throughout my day to document that particular experience and that section of the journey."

In March an art gallery event kicked off the celebration of the 30th anniversary of the Bay Trail. Schwabe has created a series of photographs that is displayed at the Metropolitan of Transportation Commission Headquarters in San Francisco.

The San Francisco Bay Trail creates an outlet for Bay Area residents and visitors to enjoy the culture and the views that they bay has to offer.