EXCLUSIVE: Witness who helped save Asian SFPD officer says attacker 'had a death grip on her' 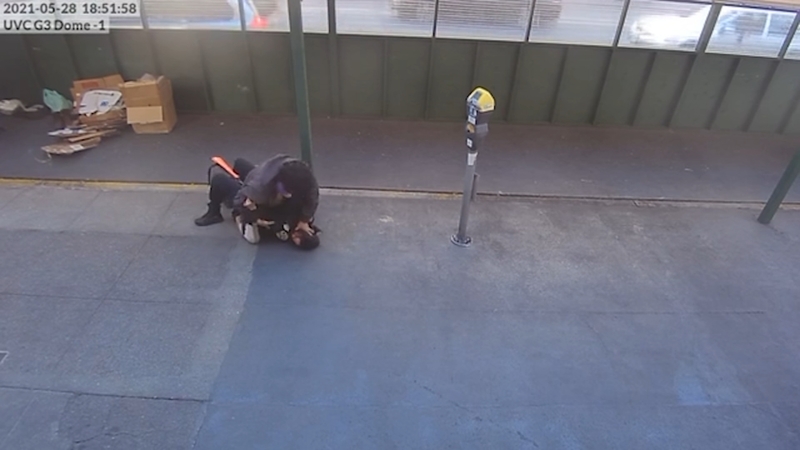 EXCLUSIVE: Witness says attacker 'had a deathtrap' on SFPD officer

She was responding to a call about a man making racially motivated threats in Chinatown, only to be attacked by the man herself.

Multiple witnesses jumped in to save her.

Surveillance video shows the terrifying moments for a San Francisco police officer Friday evening. She was responding to a call about a man making racially motivated threats in Chinatown, only to be attacked by the man herself.

He was allegedly making threats the day before, saying he "specializes in killing Asian people."

Video shows the Asian female officer approach Contreras, tell him to turn around and put his hands on his head.

He obliged, but when the officer asked if he had any weapons in his possession, he turned around, shoved her and wrestled with her before pushing her to the ground. She was carrying a bean bag gun across her back, but was clearly unable to reach for it.

A Thai woman is sharing her story after she was the victim of a brutal attack and robbery while riding BART to work in San Francisco.

"I saw it as an emergency. She needed our help and she needed it right away," he told ABC7 News.

Waldorf and several other bystanders quickly jumped into action, tackling, hitting and trying to pry Contreras off the officer, who appears to be about half the size of her assailant.

According to documents obtained by Lim, Contreras has a record of prior arrests, including aggravated assault, elder abuse and assaults on officers in other parts of California. It's unclear if he was ever convicted.

Upon learning this information, Waldorf appeared stern, saying, "He should not be let out. Some people are not safe for society and he clearly is not. I know this is just a snapshot of a person's life, but you have to look at someone's record and make a judgement."

Police say the suspect was arrested at the scene. Anyone with information is asked to contact the SFPD at 415-575-4444 or text a tip to TIP411 and start the message with SFPD.