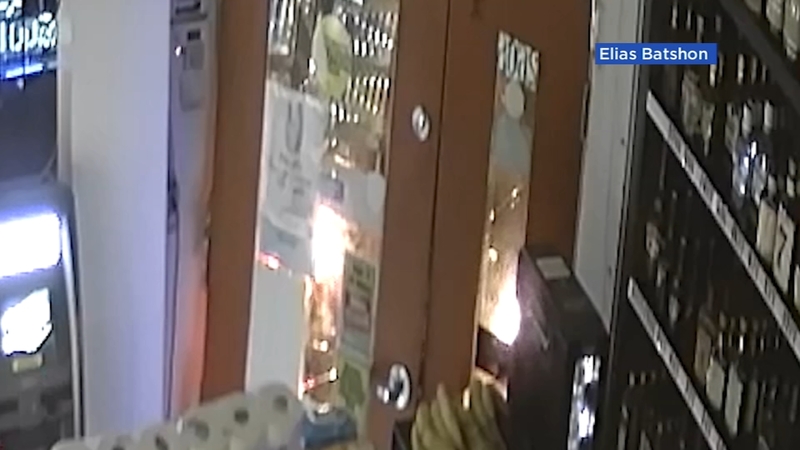 SAN FRANCISCO (KGO) -- A 30-year veteran San Francisco business owner was robbed after a suspect drove a car into his storefront in an attempt to steal $10,000 worth of lottery scratchers.

It was the second time in two weeks.

Batshon and his wife Hanady own Sherman Market, a corner store off Union and Franklin in San Francisco.

Last week, a person drove a car into their storefront at 3:15 a.m. to break the door. In the moments that followed, surveillance footage showed the burglar run in and out carrying $10,000 worth of lottery scratchers.

"It's seriously traumatizing for us," Batshon said. "At night, I can't sleep."

The veteran business owners are now facing $10,000 in repairs and are already out $20,000 worth of lottery scratchers following the back-to-back break-ins.

There have been 3,624 burglaries and 1,102 robberies reported across the city so far this year. ABC7's Lyanne Melendez captured a viral video showing a thief biking out with close to $1,000 worth of stolen merchandise at the Walgreens off Gough St. last month.

The brazen theft forcing large retailers like Walgreens to close at least ten of their San Francisco stores in the last year and prompted Target locations across the city to reduce hours.

Staffing is a struggle and so are the case clearance rates. According to data compiled from SFPD, the percentage of cases cleared for robberies, burglaries, or arson - indicating an arrest was made - was between four to six percent below the figures reported this time last year.

"We've actually increased our uniform patrol so we can have more of a visible presence out there," said Lazar. "But, we definitely still have a staffing shortage."

Meantime, business owners like Batshon hope there will be more incentive to curb these crimes.

"Some of these criminals are coming in because they know here they won't be prosecuted in San Francisco," he said. "We're scared it will just keep happening."

ABC7 reached out to SFPD for further comment, but have yet to hear back due to the holiday.