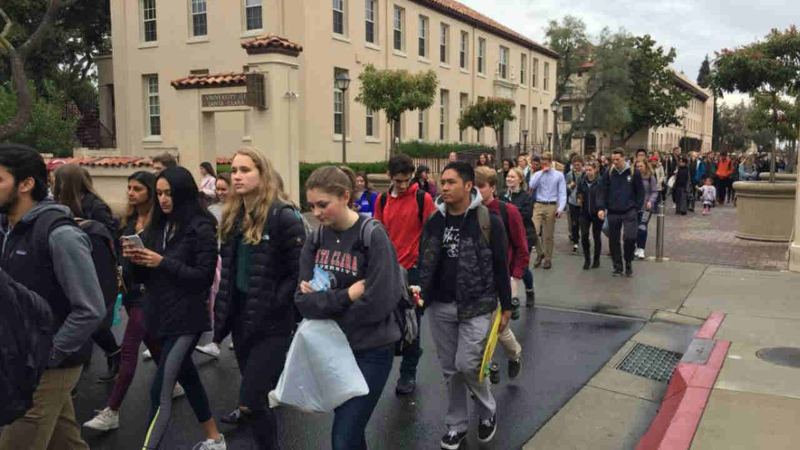 SAN JOSE, Calif. (KGO) -- It was not just high school students who engaged in walkouts over gun violence on Wednesday. So did college students, such as the estimated 400 who gathered outside the historic Mission Church on the campus of Santa Clara University at 10 a.m.

Jesuit Novice Tony Cortese read aloud the names of the students, faculty and staff members killed at the Parkland, Florida high school one month ago while students bowed their heads in remembrance.

Leaders of the campus group Santa Clara Community Action Program (SCCAP), which organized the walkout, talked about the need for change to stop gun violence and to make students safer. Then they took a walk across the Silicon Valley campus, chanting "grades up, guns down" and "protect kids, not guns." The procession cut through Benson Center, a dining and student activities building, where some students were seen studying, working on laptops and eating instead of marching.

Participants shared with ABC7 News their passion that they want to see lawmakers listen to them and others, who are adamant that stricter gun laws are needed to protect students in the classroom and on campuses. "By standing in solidarity with the students of Parkland and with every other student that has experienced gun violence in their school, we are telling our state and national leaders that enough is enough," said Harshitha Mogallapalli, a Santa Clara University senior and one of the organizers of the Wednesday walkout.

Another senior, Ryan Kincheloe, said "You've got to care for your fellow man, fellow being, and current gun control doesn't fully allow for that."

RELATED: A guide to student walkouts

The group SCCAP is providing students with resources to take action after the march, such as writing to lawmakers.

Meredith Anderson, another organizer, thinks the activism on display at the march will have a lasting impact. "I think student movements definitely in the past have had a lot of momentum to make a big change," she said, "so I think this definitely could as well."

But like a flash mob that suddenly brought people together, 30 minutes later, the grass and plaza outside the church was instantly empty. The students disappeared, presumably going back to class.