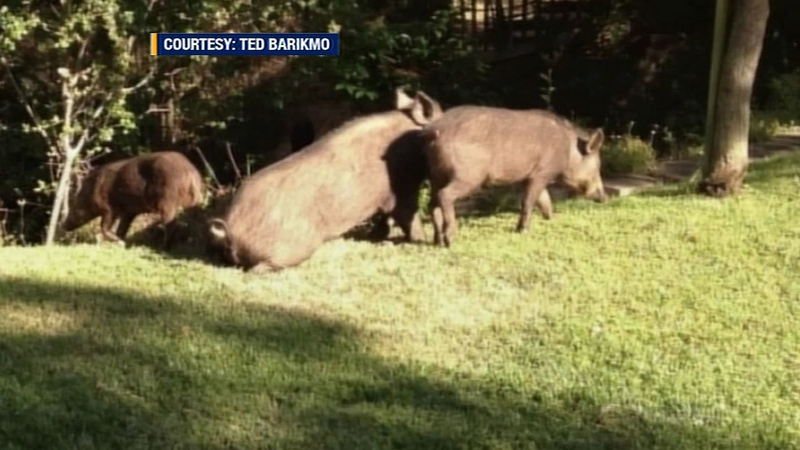 SAN JOSE, Calif. (KGO) -- Wild pigs are still running amuck in parts of South San Jose. Tuesday night, the San Jose City Council took steps to help the situation. However, according to those living in one neighborhood, it's simply not enough.

They voted to allow professionals to come into the city, trap the pigs and then kill them. It's an ordinance that was supposed to expire next week. But here's the fine print -- homeowners are the ones who have to foot the bill.

"I can't even look at it anymore because it's destroyed. There is no lawn," Barbara Downey said.

Downey hates her front yard. It used to have lush green grass, plants and flowers, but now it's just a dry dirt patch after wild pigs continued to feast on it.

"There was one morning where I got up and there was like 19 houses destroyed in one night," Downey said.

The pigs have been a fixture on Forsum Road for over a year. They were also at the Almaden Golf and Country Club. But since trappers caught and killed 14 pigs there, the problem has gotten better. Now the council is extending the trapping option.

"It's been working to some small extent and I want to make sure the neighborhoods have the options to help protect themselves," San Jose City Councilmember Johnny Khamis said.

Homeowners want the city to do more. The trappings, by the way, cost hundreds of dollars. To say residents are frustrated would be an understatement.

"If I had a gun and I was allowed to take them out I probably would," Marti said.

"It has to be more than continued because it's not fair. It's too costly to the average person," Downey said.

The reason these pigs are flocking to the area is because of Coyote Creek. They've been using it as their water source since the drought started.

That's why city council members suggest residents also call the county or the Department of Fish and Wildlife for more options.