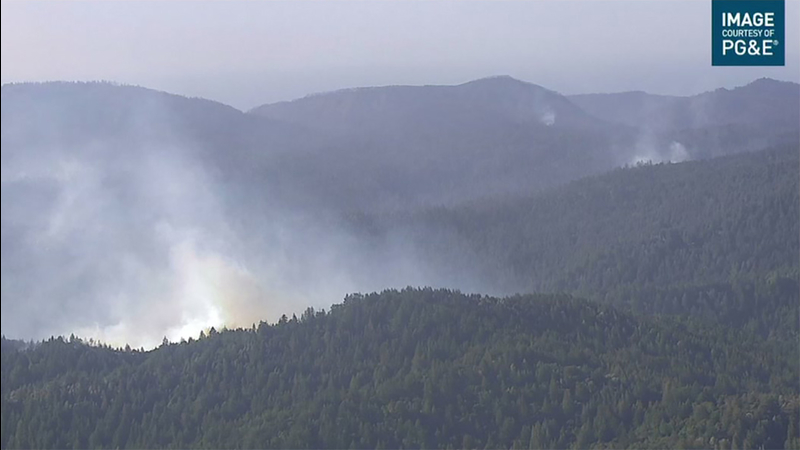 CAL FIRE says they had extra crews in place overnight because of the high winds. There have been at least 10 fires since strong winds whipped through the region last night.

The North Butano Fire is burning off of Old Womans Creek Road south of Loma Mar in San Mateo County. As of 4 p.m. Tuesday, it was at 10 acres and 0% contained. The fire is burning in the burn scar of the CZU complex and firefighters were working to cut through debris to access the blaze.

The Panther Fire was at about 10 to 12 acres Tuesday afternoon and creating some small spot fires, CAL FIRE said. The fire is located near Staff and Panther Ridge Road in Boulder Creek (Santa Cruz County). About 20 homes were ordered to evacuate along Panther Ridge Road on the east side of Highway 9. As of 4 p.m., it was 55% contained.

The Freedom Fire grew to over 40 acres near Aptos in the Larkin Valley area, CAL FIRE said Tuesday afternoon. Evacuations have been ordered in the area of Nunes Road, Halton Lane, Willow Heights and Gillette Road. About 100 homes have been evacuated and the fire is 20% contained as of 4 p.m.

Another fire burning near Boulder Creek, the China Grade Fire burned about 20 acres Tuesday. It is burning on China Grade Road near Foxglove Lane, northwest of Boulder Creek. The fire is 100% contained.

The Empire Fire was burning at Alba Road and Empire Grade, also in Boulder Creek. It was about 6 acres and 0% contained as of 3:30 p.m. The fire wasn't threatening any structures, CAL FIRE said.

The Bonny Complex was made up of two small vegetation fires that burned a total of 4 acres. CAL FIRE said the fires were contained as of 12:05 p.m. Tuesday.

ABC7 News spoke to CAL FIRE about the fires currently burning in Santa Cruz and San Mateo counties Tuesday and evacuation orders that have been issued.