Santa Rosa hit & run victim's mom: 'Did it make you feel good hitting my child with your van and leaving her to die!' 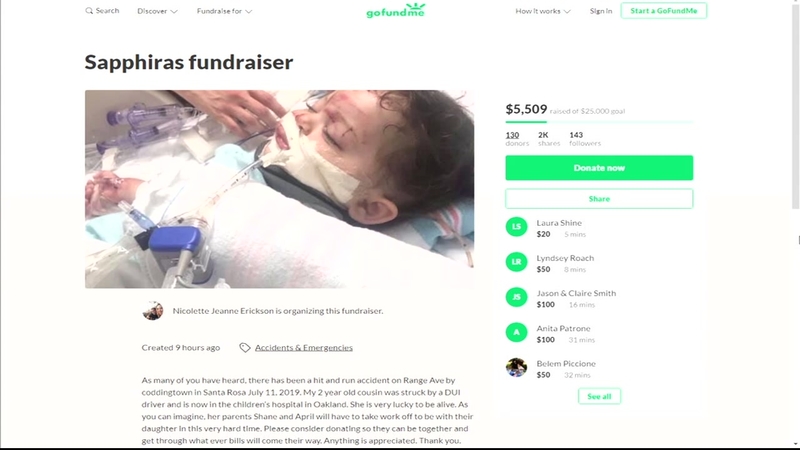 SANTA ROSA, Calif. (KGO) -- The mother of a North Bay toddler hit by a suspected drunk driver is breaking her silence as her daughter remains hospitalized with major injuries.

The 2-year-old Saphira was with her grandmother near Coddington mall in downtown Santa Rosa when police say 47-year-old Hector Cabrales Larios hit the girl with his van and took off.

Witnesses told police the child ran into traffic suddenly and was struck and was not in a crosswalk when the collision occurred.

"I woke up to my beautiful little girl saying Hi Mommy in that excited voice I love to hear so much. We woke up and made eggs for Breakfast 'her favorite of course'," Howerton wrote. "Mommy put your hair in pigtails 'My Favorite' and we played and watched Sesame Street before I had to go to Work. I kissed you goodbye and told you I loved you. Never did I imagine receiving the phone call like I did today."

Howerton then described the horror of getting the phone call about her daughter's accident.

"Words a mother never wants to hear, you need to go to the hospital immediately your child has been in an accident and needs to be airlifted," wrote Howerdon.

She described feeling a mixture of 'fear, anxiety, and rage' on her way to the hospital.

"What happened? Is she ok?... Mommy's coming... move out of the way! Things I screamed on the way to the hospital. Feeling like why was I not there to protect her I'm her mother!"

When she arrived at Children's hospital in Oakland she learned Saphira was in stable condition but suffering major injuries.

That's also when she learned that the driver suspected of hitting Saphira was allegedly under the influence.

RELATED: Suspect arrested in hit-and-run that sent toddler to hospital with serious injuries

She asked a pointed question of the suspect on Facebook:

"And as I sit her grasping my child's hand praying she gets better I ASK YOU! Was the alcohol you consumed worth almost taking my child's life did it make you feel good hitting my child with your Van and leaving her to die!!!!!! Why? I am so happy you are no longer in hiding and you have to pay the consequences for your irresponsible actions and no one else has to endure the pain you have caused me and my family."

Police said the child is expected to survive her injuries.

On Friday a family friend posted an update on the family's Go Fund Me Page for Sapphira saying: "They are slowing down the meds to see if her lungs can work on their own and that her brain functions well enough to do that. So far it is looking a little better but it's going to be a long recovery."

Police found the suspect's white van a short distance away. One investigator recognized the vehicle description from another hit and run that happened a week ago in the same general area.