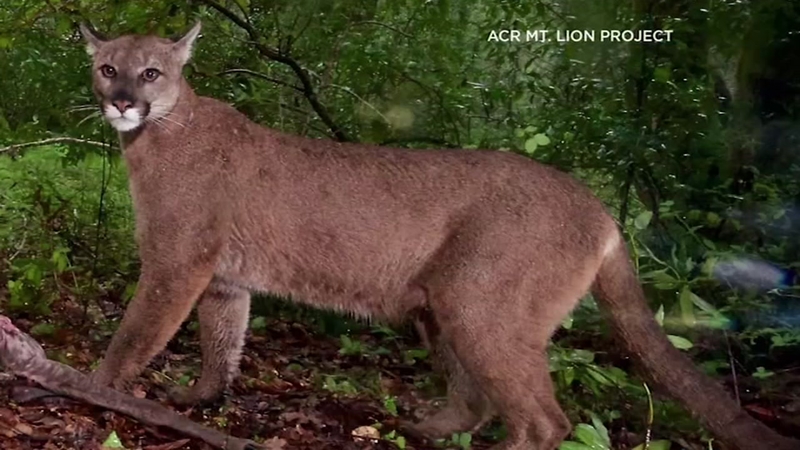 GLEN ELLEN, Calif. (KGO) -- Mountain lions like to keep a low profile, but now the paparazzi are on to them. In this case the paparazzi are wildlife experts - using high-tech equipment and special cameras to find out about the animals private lives. There are two key goals -- research and turning Bay Area residents into lion lovers.

The Mountain Lion Project, run by Audubon Canyon Ranch (ACR) in Sonoma County, is the first of its kind in the North Bay. The team will be sharing data with other mountain lion researchers around the state.

Quinton Martins, who has a Ph.D. in wildlife ecology, has tracked big cats all over the world. Now he's the principal investigator of the ACR project in Sonoma and Napa counties. Martin says generations of Bay Area lions "have been moving among people, in their gardens, in their properties, all around and pretty much staying under the radar." Increased development means there is a critical need to make sure the lions have open space corridors to travel around their huge ranges."

Since October, Martins and his team have fitted three mountain lions with GPS collars that are now being tracked by satellite -- and they are trying for more. The research is just beginning, but the project has already generated some spectacular photos and videos.

Trapping lions safely is a long slow process. It can take weeks to get a single lion to step into a baited trap. Motion-activated cameras capture a lot of the action.

Mountain lions like to keep a low profile, but wildlife experts are using high-tech equipment and special cameras to find out about the animals private lives.

When the traps are baited, researchers hang around nearby, waiting for a transmitter on the trap to alert them if there is activity.

Martins says they respond quickly, usually in just a few minutes. The lion is tranquilized and examined by a vet. "Safety concerns for the cat are paramount."

Once the GPS collar is in place, the animal is released. The collar sends location information to a satellite every two hours. The cat's movement is transmitted to a computerized map.

A look at the map shows a lion collared in October has traveled back and forth all over a 50 square-mile area. When there is a cluster of activity in the same area, the team goes out to investigate.

They use an array of high-tech equipment to track the lion on the ground. ABC7 went along as a young female was tracked near Glen Ellen. She stayed just out of sight as the team followed her signal. They never saw her, but did make a critical find. The lion had just killed a large buck and covered it with leaves. The site is a treasure trove of information about her diet and activities.

In addition to sharing data with researchers, the project is also focused on community outreach. So Martins shares a lot of his findings with residents.

When he tracked a mountain lion to Suzy and Squire Fridell's Glen Lyon Vineyard, he took them out to see the feeding site.

Suzy Fridell said at first she was a little scared. When they got to the site, the lion was there, but barely visible in thick brush.

"Finally it came into view and my heart just about leaped out of my chest, I was so excited," Fridell said. The group watched the lion for about 15 minutes until it quietly moved away.

Researchers hope learning more about mountain lions will encourage residents to want to save them, and to learn to live safely with lions in our midst.

A word of caution, tracking and trapping mountain lions is a dangerous activity that requires lots of permits. Experts say you should never approach an area where you think there's a lion. If you see one, do not turn your back on it. Make yourself seem as large as possible and make a lot of noise.

Click here to learn more about living near mountain lions and how to stay safe.