SAN FRANCISCO (KGO) -- San Francisco Supervisor Aaron Peskin has issued an apology to firefighters after he was critical of their response to a 4-alarm fire at a three-story building on Union Street in North Beach on Saturday night.

"I have been a longtime champion of the brave men and women of Local 798, and I am very grateful for their service on a busy St. Patrick's Day and that no one was injured. I am equally passionate about my community, especially when their safety is at stake. My genuine love for my constituents is what has always driven the fight in me. While I reserve the right to raise questions as more information comes out about SFFD leadership response to Saturday night's fire, it was inappropriate to raise them on the scene. I apologize to Chief Hayes-White, and I intend to personally convey this to her as soon as I return from the spring legislative recess. In the meantime, my office is very focused on ensuring any displaced tenants and employees are taken care of, as well as keeping the 500 block of Columbus intact and thriving."

On Saturday night, Peskin said it took too long to put water on the fire:

"They completely, totally failed to address this working fire in a quick, efficient way," expressed Peskin while watching the fire.

The President of the firefighters union explained what was happening when Supervisor Peskin arrived.

"He got there when we were going from an interior attack to an exterior attack, so it may have looked like we weren't putting water on the fire, but we were evacuating all of our members and setting up ladder-pipes. So to the untrained eye it may look like we weren't doing anything, but it's actually a very critical transition in the fire fight," said Thomas P. O'Connor.

"I think it was irresponsible for an elected official to try to tell them how to do their job and call for the resignation of the fire chief," said San Francisco Mayor Mark Farrell. 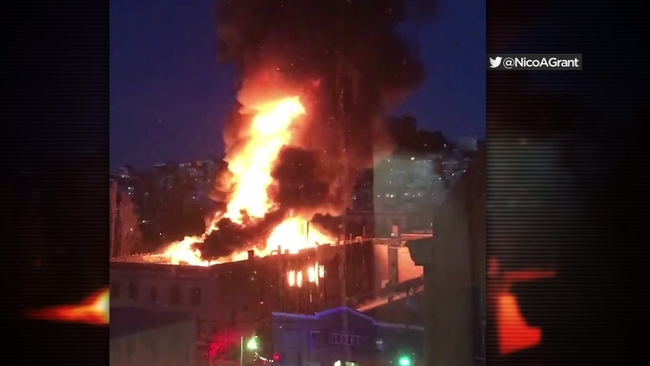