87 arrested after curfew in SF; officers will be out in full force Monday night, chief says 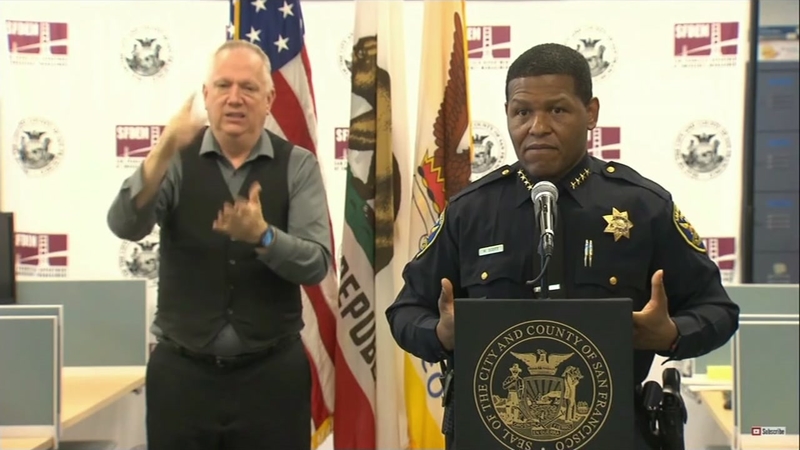 SFPD plans to be out in full force Monday night, chief says

Most of the arrests occurred near Civic Center, where a protest that began earlier in the day continued past 8 p.m. Chief Scott said officers ordered the crowd to disperse, after which they "immediately saw hostility," including objects being thrown at officers and fires being lit.

Ultimately, 87 people were arrested for violating the curfew and another 33 people were cited. A loaded handgun, fireworks and other explosives were recovered in the arrests, said Chief Scott.

Two officers were assaulted, one using a skateboard and one with a "stun gun type of device," he said.

The police chief described Sunday as a much more peaceful day than Saturday, when there was more widespread looting of businesses and more violent clashes with police. Over the weekend, 33 people were arrested for felony looting. Nineteen of those people are awaiting charges from the district attorney, Scott said.

"We didn't have enough resources," Scott said of the Saturday protests. "Officers felt overwhelmed. I went out Saturday night and talked to officers and it was it was pretty sobering because we were overwhelmed."

On Sunday, there were an additional 208 officers sent to San Francisco from around the state.

"Last night the officers had a sparkle in their eyes because they were given the resources and given the support by the mayor's curfew order to do what was needed to keep our city safe," said Chief Scott.

"We're here because George Floyd was murdered in cold blood," Aliasiah Allah said. "We are sick of the countless injustices on black and brown lives, mostly black lives.''

Chief Scott acknowledged the demonstrations that took place in San Francisco were "overwhelmingly orderly and peaceful."

The curfew in San Francisco is in effect until further notice. Everyone who isn't an emergency worker is required to stay inside their homes between 8 p.m. and 5 a.m.

"We have to see an improvement in behavior before my recommendation to the mayor would be to lift that curfew," said Scott.

He said police officers will be out in full force Monday night.

"We're going to go back at it tonight. We are committed to protecting property," said Chief Scott. "And we have squads ready to respond to any criminal activity, particularly in the midst of a public protest."

SKY7 was up above when a tense standoff between San Francisco protesters and police occurred during George Floyd march on Sunday.

San Francisco Mayor London Breed and others kneeling during this peaceful rally being held right now in the Mission. @abc7newsbayarea pic.twitter.com/zBVOVQrhRP

"Your words mean nothing if your actions are something else. Stop turning Black Lives Matter into a joke, because it's not. It's born out of pain, it's born out of disrespect and racism," Breed said.

"Your words mean nothing if your actions are something else. Stop turning #BlackLivesMatter into a joke, because it's not. It's born out of pain, it's born out of disrespect and racism," @LondonBreed said. https://t.co/poBo8rVKTY pic.twitter.com/G2vBBrjsf0

Breed said the curfew is "absolutely necessary for public safety."

Scott said the protest related to the death Floyd that swept through the streets of San Francisco Saturday afternoon started out peaceful, but as nightfall came, violence and crime began.

Scott recognized the purpose of the protest and said it was not something new.

The police chief said Sunday that 10 people were arrested on felony looting charges after Saturday's protest.

More protesters marched in San Francisco on Sunday in response to the death of George Floyd.

Most stores on Maiden Lane and Grant Street were hit, from Luxury brands to Aaron Wyse's hat shop on Geary.

"It's a very frustrating time, burning down our own house isn't helpful," said Wyse.

About 25 to 30 stores were damaged, an official with the Union Square Business Improvement District said.

The mayor also addressed the heightened COVID-19 risk during the protests.

"Imagine how many more infections are going to occur because of these large gatherings," Breed said Sunday.