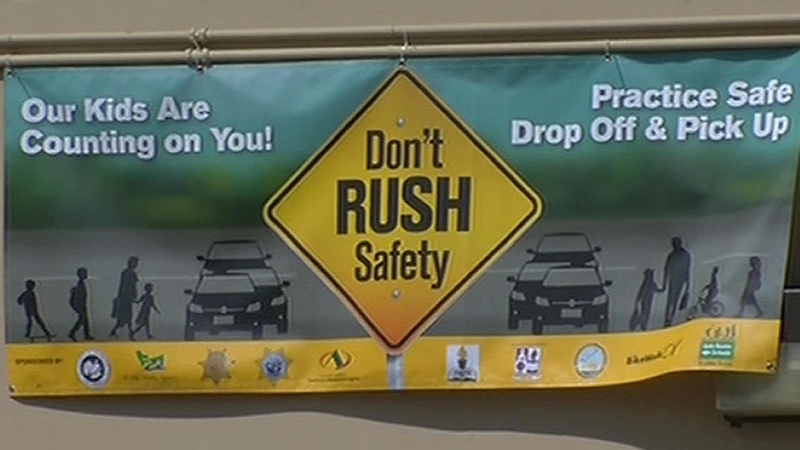 SAN FRANCISCO (KGO) -- San Francisco city officials ushered in the first day of the 2015-16 school year on Monday by ensuring that classrooms and crosswalks are adequately staffed.

At least 26 new school crossing guards completed their first day in the School Crossing Guard Program, bringing the total to 193 crossing guards staffing 187 corners at 95 schools citywide, according to the SFMTA.

Officials from school districts and law enforcement agencies say they are teaming up to tackle this issue. The big message they want to address is to slow down and that's both for people passing through and parents dropping off.

One CHP officer pointed out children are more often hurt or killed during the loading and unloading of a school bus than they are on the bus. Then, there is the danger of crossing the street while busy drivers try to get through the area.

One parent shared a story about her son and his friends getting hit by a car. "They went to cross the street in the crosswalk, three lanes stopped and the fourth didn't. She never even saw the boys, even though my son dented the front of her car and took the side mirror off. The boys got lucky. My son only badly sprained his ankle. His friend only broke his leg and luckily the driver stopped. We all got lucky, but why are we leaving this up for luck," Joanne Lauer said.

In San Francisco, they have identified 10 schools with traffic issues and will have officers rotating around those schools this week. "Drivers need to be more aware of traveling at safe and appropriate speeds, especially near schools where children learn and play," San Francisco Mayor Ed Lee said.

School started in the city on Monday, so police are on high alert and hope drivers are too. Police say they will be writing tickets to try and prevent disaster.

Every school in Alameda County will have banners on campus that read: "Don't rush safety," as part of the education they're providing for parents. In addition to the banners, a video will be emailed to parents and more law enforcement than in years past will be at the schools enforcing the traffic laws.

The SFMTA has also placed seven, large electronic messaging signs around San Francisco to remind drivers to slow down and expect children and families to be on the streets and back at school.

Cheryl Brinkman, the vice-chairman of the SFMTA board of directors said in a statement released Tuesday that speed is the leading cause of severe and fatal traffic injuries in San Francisco and that motor vehicle crashes remain the leading cause of death among young children in the country. "Our message is a simple one. School is back in session. Please slow down. You could save a child's life," Brinkman said.