Grand Princess cruise passengers will be quarantined after disembarking in Oakland, officials say 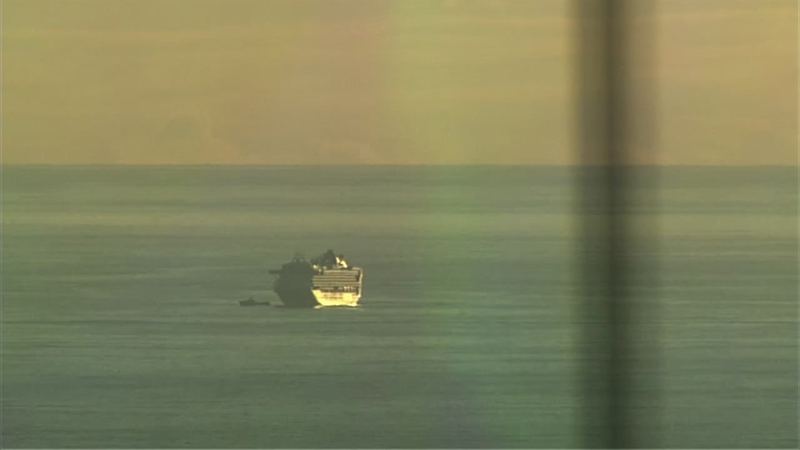 Grand Princess cruise passengers will be quarantined after disembarking in Oakland, officials say

SAN FRANCISCO (KGO) -- The Grand Princess cruise ship that's carrying at least 21 people who have tested positive for the novel coronavirus virus will be docked in Oakland only as long as it takes passengers to disembark, according to Governor Gavin Newsom. He held a joint press conference with Oakland Mayor Libby Schaaf and other state and federal health officials.
TRACKING COVID-19: Live updates about coronavirus outbreak in US, around the world

Passengers will begin disembarking as soon as Monday at the Port of Oakland, according to Cal OES. Passengers who have tested positive for the COVID-19 virus will be sent to California hospitals.

Those who have tested negative will be quarantined at a federal isolation facility, where they will undergo further testing. The crew members who have tested positive for coronavirus will be treated aboard the ship.

"This site allows us a number of advantages," says California Governor Gavin Newsom, who toured the location on Sunday.

Newsom says the Port of Oakland was selected because of the more than 10 acres that are available for the operation. The area will also be fenced off, making it a secure location that can be tightly monitored.

RELATED: Coronavirus Outbreak: Everything to know about the Grand Princess cruise ship planned to dock in Oakland

"We have extremely tight control on passengers. Whether they are systematic or not, who are being disembarked from the ship," says Dr. John Redd with the United State Public Health Service.

In addition, the port is close to the Travis Air Force Base, where some of the passengers who live in California, will be taken to be quarantined for 14 days. It is also near the Oakland International Airport, where other Americans will be sent to military bases in Texas and Georgia, and where international passengers will be sent home on chartered flights.

Governor Newsome says these passengers will have "no contact with general population at the terminals at the Oakland Airport."

The whole process could take days and will be handled by federal employees, not Port of Oakland workers, explained Mayor Schaaf.

Schaaf says she had been in talks with Oakland city officials through Saturday night about the Port of Oakland plan, but only learned of the details around 6 a.m. on Sunday morning. She says they city must help in this time of a national emergency, but adds her residents come first.

"We recognize that this is a time that we must be guided by facts not fear," says Schaaf, adding, "I will say that my questions are not over. I will be continuing to ask them. And expect answers. And that I will be sharing that information with the public in real time."

The Port of Oakland wasn't the first choice, according to Governor Newsom. "We originally looked at Alameda as a preferable site, the old naval station there. Unfortunately, some of the silting issues, grafting issues, created some concerns," he says.

San Francisco is where the cruise ship was originally schedule to dock on Saturday before the coronavirus outbreak. But that port was ruled out because the port, along the Embarcadero, it is too close to major a population center.

Authorities say there are almost 1,000 Californians aboard the ship and they will be quarantined for 14 days at Travis Air Force Base in Fairfield and Miramar Air Station in San Diego. Passengers from other states will spend 2 weeks at Lackland Air Force Base in Texas or Dobbins Air Force Base in Georgia. The U.S. Department of Health and Human Services say foreign passengers will be repatriated to their respective countries.

Travis Air Force Base in Solano County has previously served as an isolation facility for American evacuees from areas with widespread coronavirus activity.

The Grand Princess cruise ship has been circling off the coast of San Francisco since Wednesday night, as authorities worked with cruise line operators to determine where the ship would dock.

The Port of Oakland was chosen because there are limited locations capable of docking a cruise ship and, according to Cal OES, Oakland is the easiest location to seal off and allow for safe the transport of passengers once they disembark.

Vice President Mike Pence said Friday the ship would dock at a "non-commercial port," but the Port of Oakland is one of the busiest container ports on the West Coast.

Cal OES stresses no passengers or crew will be released into the general public.

"True to our community values, Oakland is a safe harbor for all," said Mayor Libby Schaaf in a media release from Cal OES.

RELATED: What to know about COVID-19 in California, how it's affecting San Francisco Bay Area

Gov. Gavin Newsom thanked local officials for their help devising a plan and said, "They are showing the world what makes our state great - coming to the rescue of thousands of people trapped aboard this ship and helping tackle a national emergency."

East Bay elected officials took to Twitter Saturday afternoon to reassure the public about safety measures that will be taken during the process of disembarking passengers.

Oakland Mayor Libby Schaaf tweeted, "Oakland's role in this operation is to support our state and federal authorities as they conduct a critical public health mission to help those impacted by the COVID-19 virus.."

Oakland’s role in this operation is to support our state and federal authorities as they conduct a critical public health mission to help those impacted by the COVID-19 virus. (1/3)https://t.co/oLAwo9dn0s

I appreciate @GavinNewsom's leadership and have been assured no one will be quarantined in Oakland, nor will any passengers be released into the general public. True to our community values, Oakland is a safe harbor for all. (2/3)

Please read for more info on why the Port of Oakland was selected and how it will be secured to ensure safety for all residents: https://t.co/oLAwo9dn0s

Nikki Fortunato Bas, Oakland district councilwoman, said, "The federal + state government are conducting a public health mission to ensure the safety of those on the ship + public."

Read the Governor's statement for accurate info on why the Port of Oakland was chosen to disembark the Grand Princess cruise ship. The federal + state government are conducting a public health mission to ensure the safety of those on the ship + public. https://t.co/1QgyKBRFtk

U.S. Rep. Barbara Lee shared she was proud of her state and city for stepping up during the public health crisis.

Proud of my State, City, County & Port of Oakland for stepping up during this public health crisis to work with the federal government to aid the people trapped on the #GrandPrincess. Protecting the public health of the passengers and our community will be central to this effort.

Oakland Council President Rebecca Kaplan used Twitter to raise concern and question Cal OES over what precautions they will be taking.

What steps are you taking to make sure people who work with the evacuees aren’t sent in unprotected and spread it into the community?
And will you fund hand-washing stations for our communities - incl. homeless - To help stop the spread of disease? https://t.co/6Q1Kf4Qyfq

"It really bothers me that my council wasn't notified about what was going on and we didn't have a say in whether or not it should dock in Oakland or shouldn't dock in Oakland," Oakland Councilmember Larry Reid told ABC7 News. "I think all my colleagues in the council would have liked to know earlier than later, finding out through the press it was going to be docked in Oakland."

RELATED: How to clean your home the right way during COVID-19 outbreak

There are more than 3,500 people on the ship, which departed San Francisco for a Hawaiian cruise February 21. The cruise was scheduled to end in San Francisco Saturday.

At least a dozen passengers who were on a different cruise on the same ship have tested positive for the novel coronavirus. A Placer County man who was on the Grand Princess cruise of the Mexican Riviera from February 11-21 died of the novel coronavirus last week. His symptoms started two to three days after he boarded the cruise ship.

For more information on why CAL OES has chosen to partner with the City of Oakland and Port of Oakland to help disembark passengers from the Grand Princess cruise, see statement here.
Go here for the latest news, information and videos about the coronavirus.

COVID-19 updates: 32M in Calif. have received at least 1 shot

SF high school seniors to go back to in-person classes