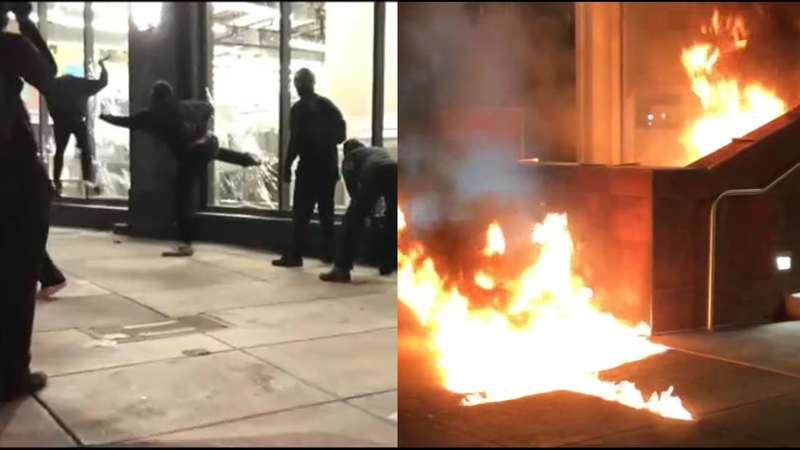 OAKLAND, Calif. (KGO) -- A big clean up was happening in one East Bay city after a night of protest. Hundreds of demonstrators were in Oakland Friday night, in protest to recent deadly police shootings across the U.S. but the march ended In violence and some vandalism to local businesses.

Crews were cleaning up broken glass at Volkswagen of Oakland, where managers say most of the dealership's windows were smashed, and a car was set on fire Friday night.

Cars were also torched at the Honda Dealership on Broadway where windows were broken.

"It's frustrating and sad. You can't dwell on it, we've got to get better as a community, there is pain, it's not one person it's everybody," said Honda of Oakland general manager George Sarkis.

Police say about 200 to 300 demonstrators marched through downtown Oakland Friday night, in protest to recent deadly police shootings across the country.

Hundreds of protesters took to the streets of Oakland calling for justice after a Minnesota officer shot and killed 20-year-old Daunte Wright during a traffic stop earlier this week.

Some lit fires, others broke windows at this Target store on Broadway.

Chris Pastena owns Calavera restaurant in the Uptown district, most of his windows were broken by some demonstrators, his security footage captured the march passing by.

"Truly I'd like to be talking to you about the reason we need to be protesting, instead we're talking about why we're cleaning up glass now," said Pastena.

Some city officials support the right to protest but say vandalizing Oakland businesses isn't the answer.

"We cannot continue to build up the city on one end, and destroy it on the other end, this has to stop," said Oakland City Councilmember Noel Gallo.

Gallo says he plans to ask the police chief how Oakland businesses can be better protected.

In a statement, Mayor Libby Schaaf's spokesperson tells ABC7 News: "The vandalism and attacks on our businesses, many of them small and locally owned is reprehensible. The police will investigate and hold those responsible accountable and we will assist our community as we build back stronger."