KGO
By by Janet O
SAN FRANCISCO (KGO) -- A free exhibit opens Thursday night at the San Francisco Presidio, in a tribute to a historic event at the end of the Vietnam War. Forty years ago, the fall of Saigon prompted a huge evacuation of children. It was called "Operation Babylift."

The extraordinary story of the orphaned children in Vietnam lives on in this exhibit. About 150 people will attend the kickoff reception Thursday night, including adoptees, adoptee parents, medical personnel, and volunteers. They may not necessarily know each other, but they share a connection by being a part of this emotional experience. 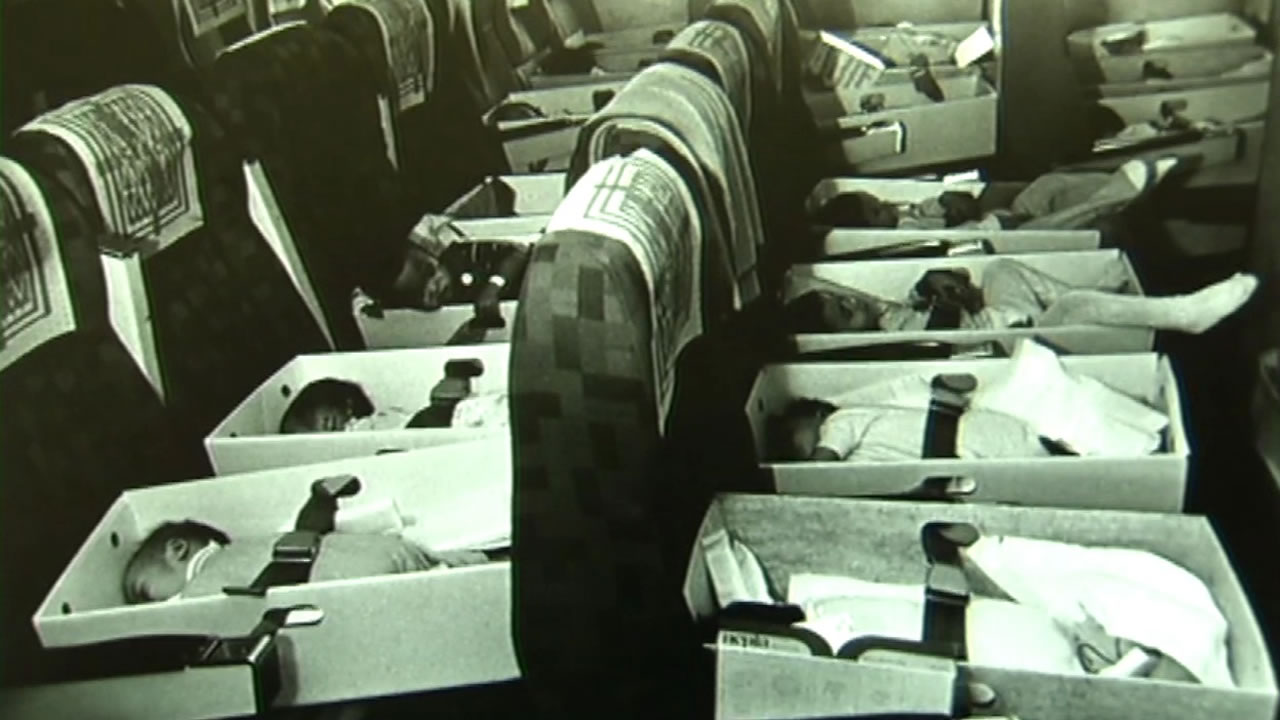 EXCLUSIVE: 'Operation Babylift' marks 40th anniversary
Forty years ago, the first of many "Operation Babylift" flights touched down, bringing refugee orphans of the Vietnam War to the Bay Area. It's a story you'll see only on ABC7 News.

Operation Babylift was a dramatic event in history. More than 2,000 children were rescued from their war torn country after Saigon fell in 1975. About 1,500 of those children passed through the Presidio before being adopted by American families. Their legacies live on through the exhibit that marks the 40th anniversary of Operation Babylift and the end of the Vietnam War.

"If you're over a certain generation you remember this, it was in the news," said Heritage Program Director Eric Blind. "It was very popular, but you may not have fully understood it. But it had a very profound effect."

The operation was not sanctioned by either the U.S. or Vietnam. 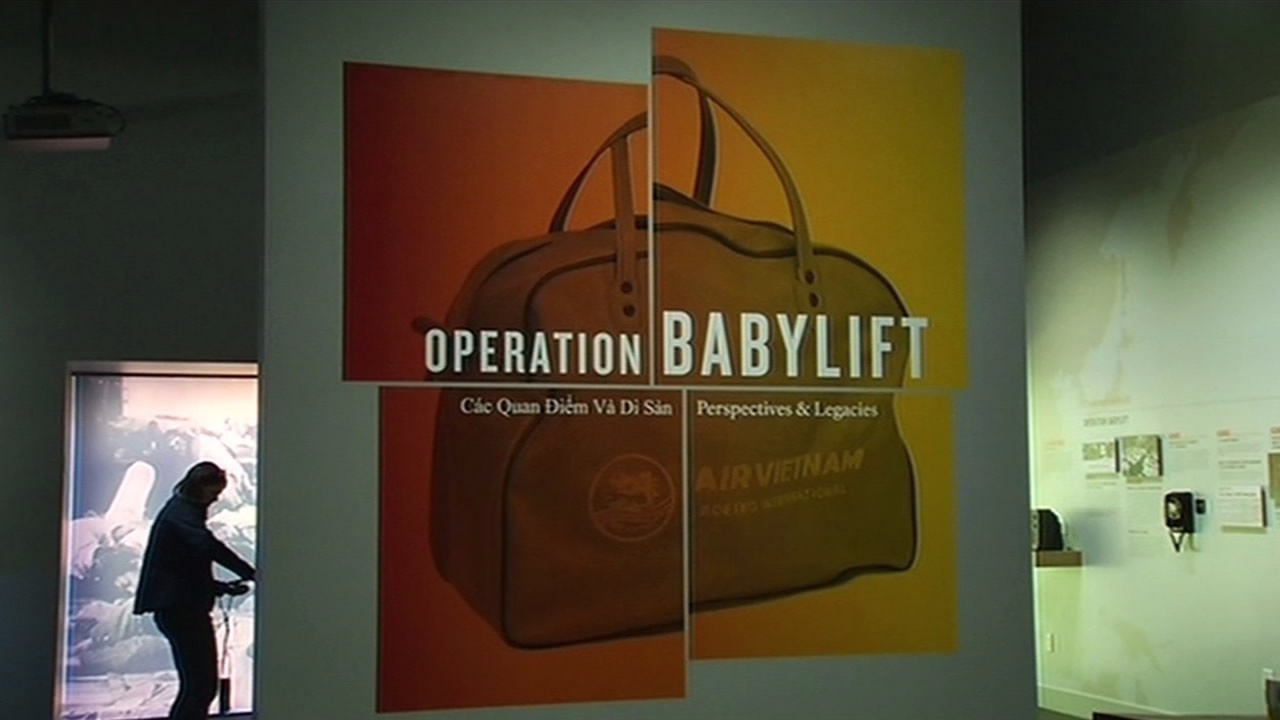 'Operation Babylift' exhibit opens in SF's Presidio
A free exhibit opening in San Francisco's Presidio pays tribute to a historic event at the end of the Vietnam War, in which more than 2,000 children were rescued from the war torn country after the fall of Saigon.

Clarita Arguillon's husband was on the first government authorized operation that ended in a deadly crash.

"He was a crewmember, he was a loadmaster, and he died," she said. "He was on bottom. When he left he didn't tell me. It was supposed to be a secret mission because by that time, the Air Force had already pulled out of Vietnam."

This undated image featured in the "Operation Babylift" exhibit in San Francisco's Presidio shows a man carrying a child from a plane.

Artifacts, photos, and a multimedia timeline tell the story through different perspectives and voices including adoptee parents, volunteers who cared for the cared for the children, and Vietnam veterans

"This was quite an extraordinary effort," Blind said. "I think one of the things that's hallmark is kinda the courage it took to take on a topic like this. You know, the war in Vietnam is kind of a raw nerve in American society; and then to add on that, the complexity of adoption. And the people that people demonstrated the most courage were the adoptees themselves, who shared their personal stories."

The exhibit will be on display until December. It's open Tuesday through Sunday 10 a.m. to 6 p.m. and is free to the public. Click here for details.
Related topics:
societysan franciscopresidiotravelwaradoptionairlinechildrenbabyhistoryfamilychild rescuechild rescuedvolunteerismu.s. & worldairplane
Copyright © 2021 KGO-TV. All Rights Reserved.
RELATED 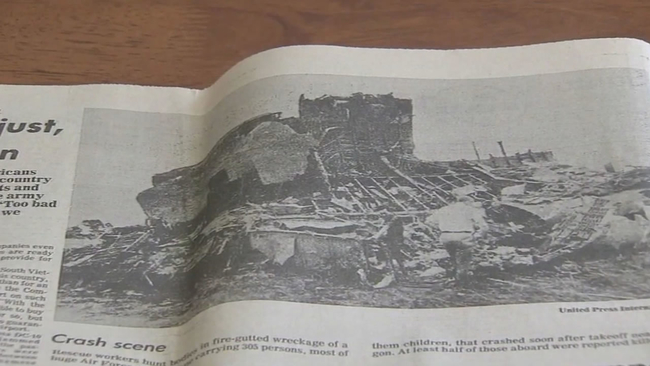 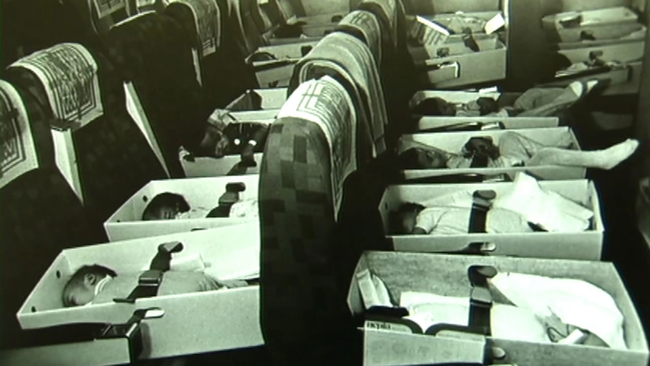