KGO
By Kris Reyes
SANTA CLARA, Calif. (KGO) -- "This is history, this is the first time that Juneteenth has been declared a paid holiday in the state of California," said Supervisor David Cortese, who spearheaded the proposal.

Approving the holiday comes just months after Santa Clara County declared racism, a public health crisis. That resolution was led by Cortese and Supervisor Cindy Chavez, who both heard from community leaders that declaring Juneteenth a holiday should be the first step in honoring their commitment to equity and social justice.

VIDEO: Juneteenth in the Bay Area: We asked people why they marched in Oakland, San Francisco
EMBED More News Videos

"This moment and this time says to the children, to our grandparents, to all people, now is the time to really learn," said Milan Balinton, Executive Director at African American Community Service Agency, one of the many community leaders who worked with the county to get the holiday declared.

"It's kind of San Jose's best-kept secret," said Helen Kassa, a program coordinator at AACSA, speaking about San Jose's 39 years of celebrating Juneteenth. "It's exciting to see the county formally recognizing it."

The unanimous vote by the Board of Supervisors means that by next year's 40th anniversary of Juneteenth celebrations in San Jose, June 19, will officially be a paid holiday in the entire county.

"I know for some Juneteenth is a celebration but for us, it's a healing moment," said Balinton.

WATCH: What is Juneteenth? History, celebrations, future of the holiday celebrating the end of slavery
EMBED More News Videos

Also known as Emancipation Day, it's the oldest celebration of the end of slavery in the country, going back to 1865. While the celebrations have been ongoing in the Bay Area, Balinton and Kassa say very few people outside of the Black community take part in the events or even know about Juneteenth's history.

"What Juneteenth represents is everyone, it's freedom for everyone," said Kassa.

The declaration comes after months of debate and some controversy over the possibility that Juneteenth might replace Cesar Chavez Day. But, Supervisor Cortese confirmed Juneteenth will get its own day bringing the county's count of holidays to 13.

"Hopefully this will happen across the country, as well. Thank you for your patience, which is an understatement to the Black community here in Santa Clara County," said Cortese.

"It means that as a nation we are going to be taking a deep dive into our history and I think as Americans we can't be afraid of the past," said Chavez.

What is Juneteenth? History, celebrations, future of the holiday
Thousands gather for Juneteenth march in SJ 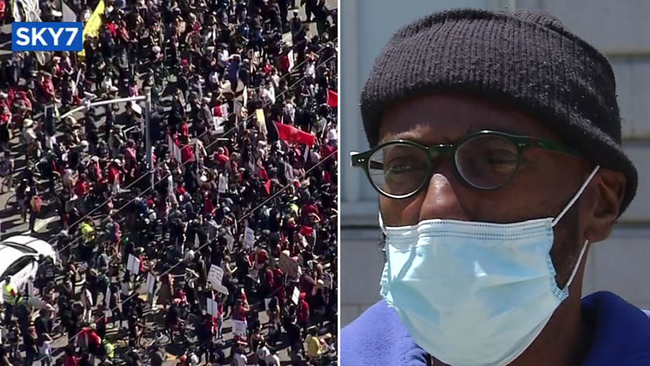 We asked people why they marched in Oakland, SF this Juneteenth
BUILDING A BETTER BAY AREA
Oakland schools plan to reopen for in-person learning by fall