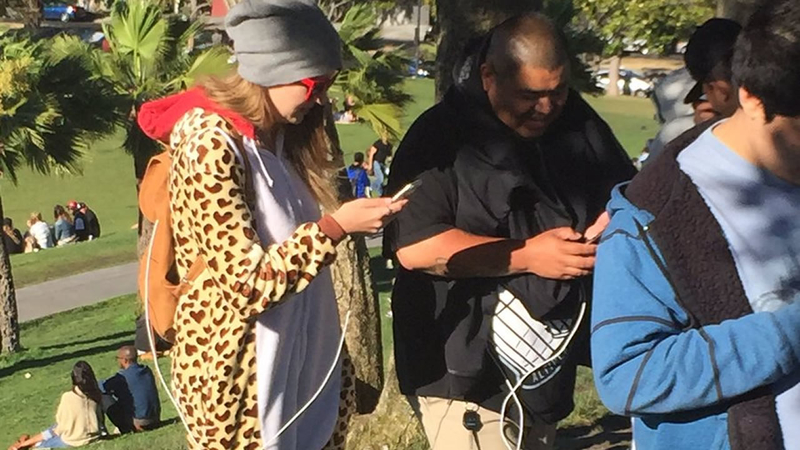 What started as a Facebook invite to one woman's friends turned into a massive Pokemon Go pub crawl.


"Even though I didn't find the Pikachu I was hunting down, my egg that hatched was a Pikachu," said San Francisco resident Layla Skramstad.

"I was telling my co-workers, I'm going to the crawl in San Francisco and they're like, 'you're crazy,' and I'm like, 'no, you're crazy,'" Sacramento resident Sabrina Scott said.

The woman who innocently posted the invite on Facebook was also at the park. "I woke up the next day for work at 8 o'clock and 500 people were going and by the end of the day 2,000, and today it's 9,000," said Sara Witsch.

Sean Yarbrough wouldn't have missed it. He loves Pokemon so much, he has a tattoo. "Some people have asked me, is this new? Is that temporary? No, I've had this for years," Yarbrough said.

When they'd captured all the characters they could in the park, off they went in search of more Pikachus and pints.

#PokemonGO super fan... He's had the tattoo for years! pic.twitter.com/6P6Rbj7NCx

"We walked all the way from Embarcadero, all down Market. We're stopping here, charging our phones, getting something to eat," said Chris Bardales of San Francisco.

Some made new friends thanks to an old game, with a new spin.

"Pokemon's pretty fun. I played it as a kid, so I'm kind of like reliving my childhood a little bit," said Hayward resident Taylor Westbrook.

"It's nice seeing people get out and game in the real world," said one player.

#PokemonGO #SF crawl attendees! Heed the warning from #SFPD! "Do not run into trees, meters... they hurt." pic.twitter.com/3y4wS4hBOF

Server load errors late Wednesday morning threatened Pokemon Go might become a Pokemon No. By mid-afternoon, it came back up.