'Heart is heavy': Thousands gather in San Francisco to march in solidarity with Palestinians 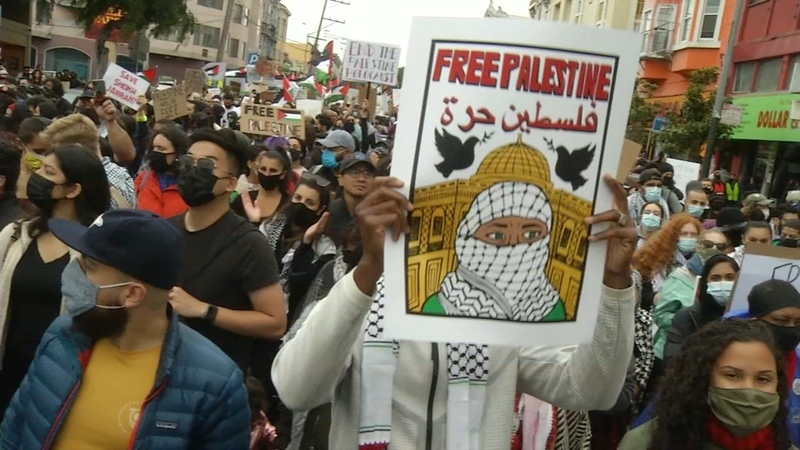 SAN FRANCISCO (KGO) -- A large group of pro-Palestinian protesters marched through the streets of the Mission District Saturday afternoon, ending with a rally in Dolores Park.

Organized by the Arab Resource & Organizing Center along with the Bay Area chapter of the Palestinian Youth Movement, it was one of hundreds of protests in cities around the world.

"My family right now is in Gaza worried about their existence on this planet," said Zeyad Elomari with Palestinian Youth Movement.

While some of his extended family still lives there, he said his grandparents were forced to flee Palestine in 1948 during the Nakba, the period when hundreds of thousands of Palestinians were expelled from their homes during the founding of Israel. It's commemorated each year on May 15.

He helped organize the protest which he says got support from other social justice groups.

He estimated more than 9,000 people attended the march at some point, though the crowd decreased in size by the time they made it to Dolores Park several hours after they began.

"My heart is heavy today but it also fills me with hope," said Diyala Shihadih, referring to the number of people who showed up.

In her view, the solution to the ongoing conflict is simple.

"The only thing that is going to end this is the liberation of the Palestinian people," she concluded.

But getting there has been one of the most complicated geo-political fights in modern history, despite the common ground.

"The majority of Arab and Jews believe in coexistence," said Offir Gutelzon, an Israeli who currently lives in the Bay Area and organized a rally Friday night in Palo Alto called "Arabs and Jews refuse to be enemies."

He supports Israel's right to defend itself from attacks by Hamas, but said he has been appalled by the violence within Israel.

"The escalation in the country is driven by extreme Arabs and extreme Jews," he remarked.

There's a dark irony in the whole situation said Ellen Brotsky, whose own grandparents fled Russia during the anti-Jewish pogroms.

"Jewish people have experienced our own oppression, attempts at ethnic cleansing, like the holocaust. And that's why the lesson we take away from the holocaust and from the pogroms, is 'never again' means never again for anyone."