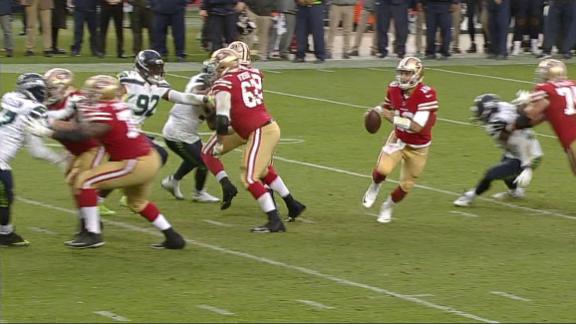 With 1:07 left in Sunday's 24-13 loss, 49ers rookie quarterback C.J. Beathard suffered a left leg injury during a big hit as he attempted a pass, forcing him to depart.Beathard also appeared to slam the back of his helmet on the turf as he was whipped backward to the ground.

Garoppolo, to loud cheers from the fans still in attendance, entered and offered a three-snap appetizer for fans starving to see him play.

Garoppolo promptly scrambled for 4 yards, threw a 9-yard completion to receiver Aldrick Robinson and then evaded pressure before throwing a 10-yard touchdown pass to wideout Louis Murphy as time expired. It was the first touchdown the 49ers scored against the Seahawks in two meetings this season.

Of course, the biggest question Shanahan now faces is the same one he's heard endlessly since the Niners traded for Garoppolo on Halloween: When will Garoppolo become the starter? As has been custom, Shanahan was noncommittal after Sunday's loss.

"It's a tough position to be in and you don't want anyone to get hurt, but Jimmy will have another week," Shanahan said. "We'll watch this tape tomorrow, work with him Monday and Tuesday and see what happens at practice Wednesday."

According to Shanahan, that quick cameo won't influence his decision this week.

"Those plays have nothing to do with anything," Shanahan said. "That's just running around and he made a great play, but no, those have no bearing on it at all."

What will have an immediate bearing on the decision is Beathard's health. He walked to the podium for his postgame news conference with a slight limp and said he's set to have an MRI on Monday. Beathard also said he felt pain in his hip. Shanahan said the optimistic hope is that it was just a bruise.

The hit that injured Beathard was, unofficially, the 14th he took in Sunday's game as he faced constant pressure from the Seahawks. Beathard was sacked three times and finished 22-of-38 for 201 yards with an interception for a passer rating of 61.4.

Shanahan said he did not consider going to Garoppolo despite the offensive struggles earlier in the game, largely because Beathard wasn't getting much help.

"If I felt it was because of the quarterback, I would have made a change," Shanahan said.

Garoppolo, meanwhile, did his best to stay focused even as the game slipped out of reach in the waning moments.

"There's never an easy situation to go into," Garoppolo said. "Being the backup, I've experienced both ends of it. But you always have to be ready. I've been saying it for the last four years. You never know when your time is going to come, if it's going to come, so when it does you have to take advantage of it."

Because he's still new to the offense, Garoppolo required a wristband that helped him get the playcalls out and the ball snapped in time, something he barely did on his first play.

"I have been saying this for the past couple weeks now," Garoppolo said. "It's like a different language, but it's similar concepts but just different names and everything. That's a part of being a quarterback. There's little things that people don't see outside of the locker room and you need to master those things, and I'm in a situation where I've got to do it as fast as possible."

Depending on Beathard's health and how that process comes along for Garoppolo, it's possible his time will come next week. It would be a fitting first start for Garoppolo as the Niners' next opponent is his hometown Chicago Bears.