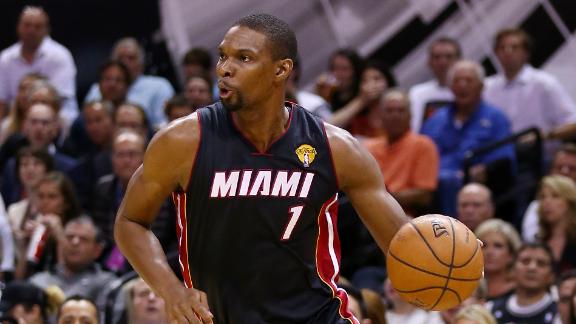 ORLANDO -- The agent for Dwyane Wade and Chris Bosh said his clients continue to sort through their options and that "nothing's changed" in their approach since the July 1 start of free agency.

Chicago-based agent Henry Thomas insisted to ESPN.com on Sunday that Wade and Bosh are dealing with their free agency on individual terms, but that both want to make decisions that give them the best chance to compete for championships the next four seasons the way they have the last four years.

As teammates alongside LeBron James in Miami, the Heat advanced to the NBA Finals the past four seasons and won consecutive titles in 2012 and 2013. The Heat's attempt to become the fourth franchise to win three straight titles ended last month in a lopsided loss to San Antonio in five games.

"They appreciate what they've done in Miami those four years together, and they want to make sure they have a chance to have that same success the next four (years)," said Thomas, who attended Sunday's games at the Orlando Pro Summer League. "With Dwyane, he's been there his entire career, so he's in a unique situation. Chris has made it known how he's felt about being in Miami these four years."

James, Wade and Bosh each opted out of the final two years and more than $40 million left on their respective contracts last month to become free agents. The moves, in addition to other expiring contracts and options held by Miami's other players, gave the Heat at least $50 million in cap space and flexibility for team president Pat Riley to retool the roster in free agency.

Riley and coach Erik Spoelstra have traveled the country in recent days on a tour of free-agent meetings with Pau Gasol, Trevor Ariza, Luol Deng and Marvin Williams, among others. The Heat appear to have set a priority on adding perimeter depth behind James and Wade and also to upgrade the power rotation.

Thomas insisted that Bosh and Wade are operating under separate circumstances, but anticipates the process "to move more quickly" as the July 10 signing period approaches.

Thomas also represents Heat forward Udonis Haslem, who opted out of $4.6 million on the final year of his deal to enter free agency.

Thomas would not say if Bosh or Wade are considering meeting with other teams, but did scoff at speculation that Bosh has entertained accepting a four-year max contract to leave Miami. Thomas said he does not believe James, Wade and Bosh have met collectively since they got together in late June to initially discuss their free agency plans.

"This is a process -- really a different process for each one of them," Thomas said. "It just has to play out. But what I can tell you is that nothing's changed."