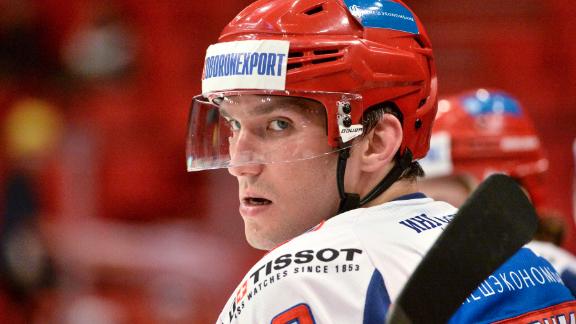 MINSK, Belarus -- Alex Ovechkin will miss at least one game at the ice hockey world championships after sustaining a right leg injury during Russia's game against Germany on Sunday.

The star forward needed hospital treatment after Marcus Kink hit his right knee midway through the third period. He had stayed on the ice for several minutes before he needed help to the bench.

The International Ice Hockey Federation says Ovechkin will miss Russia's final group game against host Belarus on Tuesday but remains with the team.

Ovechkin has scored three goals and added six assists for Russia in the tournament.

Russia's ice hockey federation says it's not clear whether he will be able to return to the ice, but Ovechkin said on Twitter "all's OK" with a link to an Instagram photo of him giving a thumbs-up.

"Sasha will definitely stay with the team," Russia general manager Andrei Safronov said of Ovechkin on Monday. "Even if he couldn't play, he'd still be here. He's not just a part of this team, he's a leader."

A medical scan of the Russia captain's knee ruled out torn ligaments.

"He's OK at the moment," Safronov said. "There's some pain, but he's working with the doctors."

Kink was not penalized on the play.

"It's an unfortunate incident, and we hope he's OK," Germany coach Pat Cortina said. "He's a great player and a great ambassador for the game of ice hockey. We need players like that, and hopefully he will be fine and we'll see him back on the ice soon."

Russia is waiting for the arrival of another star forward, Evgeni Malkin, who agreed to join the team at the worlds after his Pittsburgh Penguins were eliminated from the NHL playoffs. Malkin could be available for the game against Belarus.

Russia has won all six of its games and is the only unbeaten team in the tournament.