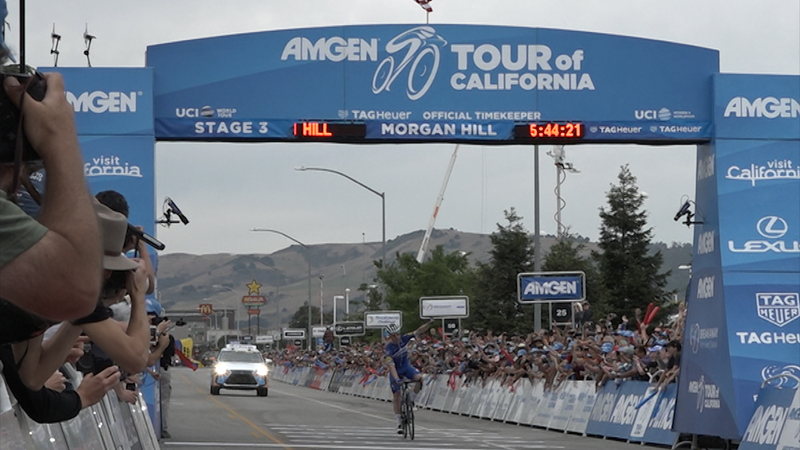 MORGAN HILL, Calif. (KGO) -- All eyes of the bicycle racing world were focused in on the South Bay during the third stage of the Amgen Tour of California.

A great moment for the Bay Area, especially residents from the South Bay city.

Cycling fans in full attendance here in Morgan Hill for the @AmgenTOC Stage Three finish. For now fans watch the live stream, racers should be coming down the finish line in about 2 hours. pic.twitter.com/6y5RZVDGTT

"It's huge for Morgan Hill and the whole community," Morgan Hill resident Sahara Almquist said. "It puts us on the map a bit more, it is the home of specialized. It's a great cycling community. There's plenty of riding here whether you want to do road or mountain, this just highlights that."

Hundreds of fans from across the country and world came to see the best riders cross the finish line.

We have made our way to the finish line! The racers are making their way to Morgan Hill and the fans have lined the sidelines to see it all happen! pic.twitter.com/nqSciMhpRm

But they showed up hours before to take part in the festivities happening at the end of the race.

"We have a world-class bike race, but there's so much going on, including the lifestyle festival," Amgen Tour of California President, Kristin Klein, said. "There's not many events of this magnitude that you get to get this close and personal with the actual riders. We really encourage you to see the live action."

The live action did not disappoint on this day.

At the end, Remi Cavagna won by nearly an eight-minute margin over the rest of the peloton.

Here comes your winner! Remi Cavangna cruises to the Stage 3 victory in the @AmgenTOC here in Morgan Hill! pic.twitter.com/szZbpPowyy

The finish is what San Jose resident, "Aussie" Bob Horne comes for.

He's watched each of the finishes that have happened in the Bay Area over the last seven years.

"It's very exciting, especially at the end when everyone is waiting for the riders to come in," Horne said. "Then you finally see them come in and there's a build-up with people waiting for them to come, it's very exciting. I'm into biking and I like to see all my heroes. It's great. I think it's great for me and it keeps me motivated to ride."

There is a clear following and appreciation for the cycling world in the Bay Area as evident from the number of fans cheering at the finish line.

2nd and 3rd now crossing the finish line at the @AmgenTOC in Morgan Hill! pic.twitter.com/g0daKoRMgZ

The Amgen Tour of California has been a staple since 2006 with Bay Area cities making dozens of appearances in the race's history.

And the Tour plans on keeping a strong connection to the Bay Area in the future.

"Look at the backdrop here," Klein said. "The Amgen Tour of California is essentially an international postcard for the state of California. We can't think of a better place than finishing here in Morgan Hill. We look forward to coming back to Morgan Hill. Last year we were here, of course you see us back here today. We really look at Morgan Hill as a long-term partnership."

The next stage of the Amgen Tour begins Wednesday, May 15th with a departure from Laguna Seca Raceway in Monterey and a finish in Morro Bay, CA.

The entire race ends Saturday, May 18th in Pasadena.

Follow along with the race as it continues through California by checking out the Amgen Tour of California website.